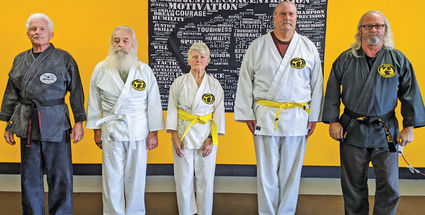 Sensei Bill with members of the Senior class.

The EMB (Eclectic Mind and Body) Martial Arts dojo has moved to a new location at 20424 W. Valley Blvd., Ste. C, behind Domingo's Bar & Grill. The owner, Bill Laninovich, has transformed the space into a beautiful and inviting studio with classes offered for students from six years of age to 106.

Bill's teacher and founder of Eclectic Mind and Body, Most High Sensei Fred Hamilton, received his first black belt from Chuck Norris in 1972. Hamilton then went on to study various styles such as Tang Soo Do, Shinjitsu Do, Krav Maga, Jeet Kune Do and boxing.

Bill's vision for the Tehachapi EMB dojo is summed up in a statement from the dojo's Facebook page:

"We believe that all Martial Arts systems have good things to offer. We believe that traditional styles have their strong points and their weak points depending on which system you study. We like the strong points offered and are not too crazy about their weak points. That's why we are Eclectic. We take the strong from various Traditional Systems and disregard the weak. It doesn't make sense to us to have strong Korean Feet yet settle for Korean Hands when Boxing Hands are available. Or to limit ourselves to the rules of boxing when we can choose to combine the use of elbows, fingers or any number of soft style hand techniques, that can easily be rolled off of a solid Boxing Foundation? The Mixed Martial Arts Era has taught us a lot of new lessons. One important lesson is that more often than not the basics win the fights. Whether it's Boxing, Karate, Grappling or whatever. It's usually a basic technique that ends the fight. Therefore, we believe that if you master the basics you will be a solid fighter! In a nutshell that's exactly what we are. 'The Basics Mastered.' We can't promise that training with us will turn you into a world class fighter, but we can promise that you will be a better fighter than you were before you came to us!"

As Bill says, it's not the art, it's who is better at their own art who prevails.

Classes are currently being offered Tuesday through Thursday from 7:30 a.m. until 7:30 p.m. The Senior Class is offered Tuesdays and Thursdays at 11 a.m. and is what Bill describes as an exercise class focusing on martial arts. It is the only martial arts class in town offered to seniors. The senior students appreciate the varied disciplines they are learning at EMB Martial Arts. Their primary reasons for attending a martial arts class, as opposed to other types of exercise classes, are increased balance and coordination, mental stimulation, breath control and self-defense. The self-defense portion of the class also involves the use of bo staffs, which are Japanese martial arts staffs. The staffs allow the seniors to protect themselves with a minimal amount of strength. Bill says no one thinks twice about a senior walking with a stick so criminals may see them as an easy target, yet with correct training in use of the staff, the senior is more than adequately able to defend him or herself.

The classes end with a series of yoga stretches. A 73-year-old lady who has taken the classes for about one year states that her balance has improved so much that she can now stand on one leg and swing her other leg backward, forward and sideways. She has achieved a yellow belt and is working diligently to improve her ranking. Another student, a 64-year-old gentleman, reports that his stamina has improved, he generally feels better and no longer needs chiropractic sessions.

In addition to self-defense training, all of the dojo's students learn prescribed sequences of techniques or forms and progress through a seven color belt ranking system, beginning with white and culminating in black, representing mastery.

Student retention is high with many of the students studying at the dojo for several years. One young lady, who has been studying with Bill for five years, achieved her black belt and is a sensei (teacher) at the dojo. Sarah Mathis participated in team sports at a younger age but loves the discipline and self-confidence that the eclectic martial arts training has afforded her. She stressed that humility is also an important component of the code of conduct practiced along with the physical aspects of martial arts. Mathis, and many of the students, commented that the Tehachapi EMB Martial Arts dojo feels like family which is another compelling reason to study here.

Bill extends an invitation to all to stop in and observe a class or even try one out!