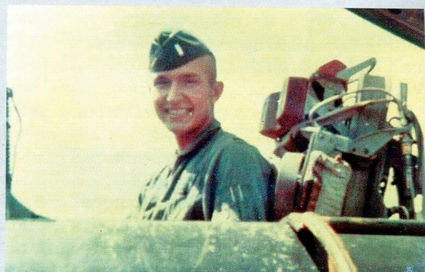 Gruters in cockpit of MISTY FAC F-100 in Vietnam.

I often receive emails that have familiar names attached and I am careful not to forward their addresses to anyone else. This particular email caused me to take notice and do a little research on the person who sent it originally. It was signed by Capt. Guy Gruters, along with some impressive quotes. It also gave his website – http://www.guygruters.net.

My interest was piqued when I read he was a motivational POW speaker and an author of a book titled "Locked Up With God."

Below are some of the quotes –

"If freedom of speech is taken away, then dumb and silent we may be led, like sheep to the slaughter." – George Washington

"The true soldier fights not because he hates what is in front of him, but because he loves what is behind him." – G. K Chesterton

This really caught my eye!

"Some People Dream the Dream...

Some People Live the Dream...

Some People Defend the Dream...

In the book, he describes the importance of teamwork, courage, forgiveness, loyalty and faith in God.

The forward of his book is written by Colonel George "Bud" Day, USAF, Medal of Honor recipient. Day was a fighter pilot in World War II, the Korean War and the War in Vietnam. Colonel Day is the most decorated Air Force officer in history and the most decorated living military officer in America.

After pilot training and fighter gunnery school, he volunteered for Vietnam and served six years there, more than five years as a POW (Prisoner of War).

During his flight operations as a Forward Air Controller over 10 months, Guy flew more than 400 combat missions, first for the 173rd Airborne Brigade in the O-1 "Bird Dog" Cessna L-19, light observation aircraft and then for the MISTY Fast FACS in the F-100F Super Sabre over North Vietnam.

His decorations include more than 30 combat awards, with two Silver Stars, two DFCs, two Purple Hearts, a Bronze Star for Valor, the POW Medal, a Presidential Unit Citation, 20 Air Medals and other medals.

When I went to his website and read his story, I was brought to tears. He said, "They got us out ... The American People's prayers and desire to rescue us from the communist prison hell resulted in the pressure on our leadership to get us out of there, culminating in the spectacular and perfectly effective Christmas bombing of 1972, which did just that. Probably the finest and most heart-warming thing done by Americans was the wearing of bracelets with a POW's name on it."

These intense quotes were found online concerning the effects of Linebacker II on the men held captive in Hỏa Lò Prison, also known as the "Hanoi Hilton."

POW and Admiral James Stockdale, remembers: "At dawn, the streets of Hanoi were absolutely silent ... Patriotic wakeup music was missing ... street sounds, the horns, all gone. Our interrogators and guards (were solicitous)... morning coffee was delivered...Any Vietnamese officer's face . . . telegraphed... hopelessness, remorse, fear ... Our enemy's will was broken."

On Sept. 9 1965, while flying from USS Oriskany on a mission over North Vietnam, Stockdale ejected from his Douglas A-4 Skyhawk, which had been struck by enemy fire and completely disabled. He parachuted into a small village, where he was severely beaten and taken prisoner.

Stockdale was held as a prisoner of war for the next 7-and-a-half years. As the senior Naval officer, he was one of the primary organizers of prisoner resistance. Tortured routinely and denied medical attention for the severely damaged leg he suffered during capture, Stockdale created and enforced a code of conduct for all prisoners which governed torture, secret communications and behavior.

He was released as a prisoner of war on Feb. 12, 1973 during Operation Homecoming.  On March 4, 1976, Stockdale received the Medal of Honor.

POW Michael O'Connor: "When we heard them crying in the streets, we knew it would soon be over."

POW Lt. Col. Frank Lewis remembers:  "I ... danced around my cell like a fool, yelling and cheering ... I cried with pleasure." The POWs cheered.

In the courageous Christmas bombing of late 1972, Strategic Air Command U.S. Air Force B-52 bombers and Tactical Air Command Fighters and U.S. Navy Aircraft Carrier Fighters forced the North Vietnamese to release Guy and the other surviving POWs in March of 1973.

Guy's brother, Terry, volunteered for multiple tours in Vietnam over the years of Guy's imprisonment in his attempt to best help to end the war and bring Guy home.

Terry was shot down two times and crash-landed once behind enemy lines during those tours. His persistence was rewarded and he flew one of the B-52s which actually did bomb his brother out of the prison camp!

How wonderful that Guy's brother was instrumental in blowing the doors off of the prison! I called Capt. Gruters and he was so kind to this emotional crazy woman from Mojave. He sent a signed copy of his book to me. I am honored and truly touched to know another one of our great heroes who loves America and freedom!