The Year of the Skunk 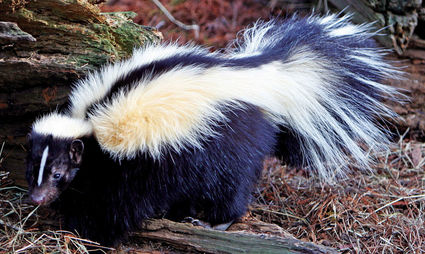 "1997 was a year when we had a lot more skunks than usual reported in Tehachapi – they were everywhere that year. We had them on Bamboo Court, Brentwood, Curry Street, around the high school, all over town. And even when people didn't report seeing them, they certainly smelled them. As the California Department of Fish and Game warden for the Tehachapi area said, "At the time, I had a lot of calls about skunks." People kept finding them in box traps that they had set for ground squirrels or cats, and then came out to discover a skunk trapped instead. Skunks were also coming into people's houses through dog and cat doors.

A frightened or angry skunk will usually stamp its front feet first as a warning display. If this doesn't get a potential predator to back off, a skunk will raise its tail while continuing to face the threat. That's the last warning – if a skunk continues to feel threatened, it will pivot on its front feet, whirling around and turning its back to eject spray from two glands located near the base of the tail. It's three strikes and you're out! They'll usually warn you, but it can all happen pretty fast if you crowd them.

One homeowner was shooing a skunk out of the living room with a broom that year, and I guess they tried to rush it – skunks are pretty slow, plodding creatures by nature – and it cut loose and sprayed in their living room. That incident required extensive cleanup. They had a little "scent souvenir" that lasted for weeks, or more. . .