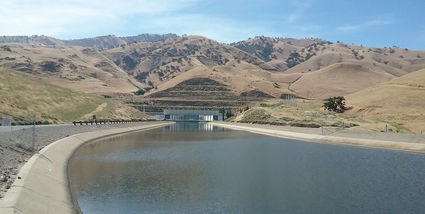 The mighty 36-foot-deep California Aqueduct at the Edmonston plant at the southern end of the San Joaquin Valley, carrying State Water Project water south from the High Sierras. From here, water in a pipeline to Tehachapi flows by gravity seven miles north to the first Tehachapi-Cummings County Water District pump plant, which launches the water on its journey 3,.425 feet uphill. Backup generators kept the district pumps going during recent power shutdowns. Wind-driven safety concerns during debris clearance at the turnout, however, forced the district to halt pumping for 22 hours.

"In four instances, we were notified of potential shutoffs," water district Manager Tom Neisler said. "We were shut down all four times.

"We're equipped to handle that. Our standby generators are hardwired to the natural gas supply with automatic transfer switches."

Neisler said it takes ten seconds for the generators to take over when power is lost.

"We never lost productivity, with one exception," he said. Huge tumbleweeds from the east, blowing from the mountains, he said, blocked the Tehachapi turnout at the State Water Project Edmonston pump plant at the southern end of the San Joaquin Valley. District employees regularly clear debris caught on the bar screen of the 37-inch, high-velocity turnout – sometimes twice a day -- but the unusually strong winds and accumulation of vegetation presented a safety hazard for district employees.

"We can overcome the loss of electricity," Neisler said. "but we can't control the weather. There were waves with whitecaps on the canal. The guys on the gangway clean the screen manually. I would not send them out. It was not safe."

Consequently, the whole system was down for 22 hours on Oct. 31.

It takes half an hour to shut down the powerful engines in the four district pump plants and six to eight hours to bring the system back up.

"We need to develop pressure in the engines to overcome 500 pounds of pressure to push the column [of water] up the hill. We start one engine slowly, then a second then a third. We make sure air and debris are out of the system." To build pressure, they start at the top. 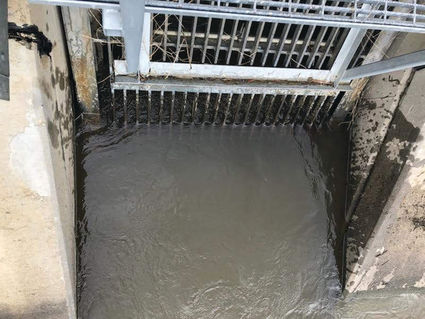 At the Edmonston Plant, the turnout that diverts water to Tehachapi. Sixty to 70-mph winds choked the entrance with a wall of tumbleweeds.

Water flows north by gravity for seven miles from the Tehachapi turnout at Edmonston to the first district pump plant, located on the Tejon Ranch. Plant two, also on Tejon Ranch property, is five miles higher and plant three at Stallion Springs is another mile. Plant four is at the California Correctional Institution (CCI) in Cummings Valley. The vertical lift between plants is 1,045 feet.

Four 1,200 hp engines at the first three pump plants move the water. The fourth plant at CCI has 500 hp engines.

The SWP water is used primarily for agriculture and is not treated. Through its spreading fields, the district uses SWP water to recharge ground water in Cummings Valley. The porous earth naturally cleans the water, and – years later – it can be drawn out by well and used for domestic purposes.

All domestic water in the Tehachapi valleys comes from three underground basins.