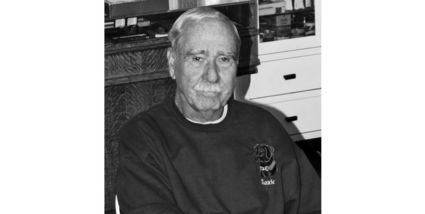 The Tehachapi Valley lost a kind, interesting and community-minded man with the passing of Harold Cox, 84, on Oct. 20. Harold had been battling cancer but was still able to get around, and only a few weeks ago celebrated his 84th birthday at Kelcy's Restaurant surrounded by a large group of friends.

Harold had a special appreciation for antiques and collectibles, and he did his part to capture some of America's past, creating a small but thoroughly-stocked gasoline filling station from the 1920s and a soda fountain in the Tehachapi home he shared with his wife Adeline.

As a member of the Tehachapi Heritage League, almost from its inception in 1976, Harold might be expected to have grown up with a specialized interest in antiques, but that actually came later in life. He had a fairly Norman Rockwellian, typical boyhood of his era. Born in 1935 to Harold and Iva Cox, young Harold was raised in the small Illinois town of Marceilles (pronounced Midwestern style as Mar-cells). His father was a carpenter and also helped build a massive lock for raising and lowering ships on the Illinois River, so Harold got to see how the lock worked firsthand. As a boy, Harold used to help load passengers' baggage on the train at a nearby depot, and he also worked as a pin setter at a local bowling alley, manually setting up the pins after each ball was rolled for the grand sum of five cents per game.

In 1950 his life changed and he became a California boy, moving to Bakersfield when he was 14. He arrived at his new Kern County home by a passenger train that rolled through Tehachapi back when there were three regularly-scheduled passenger trains that came through town each day.

Harold attended East High with his future wife, Adeline (Addy) Neufeld, and worked at Green Frog Market on Alta Vista in Bakersfield. After graduation from East High in 1953, Harold went to Bakersfield College. He and Addy married in 1954, then he got a degree and teaching credential at San Jose State. The newly minted industrial tech teacher, with experience in photography, drafting, technical math and related subjects, accepted the first and only job of his teaching career with the Antelope Valley Union High School District, where he would work for the next 45 years.

When Harold was hired at AVUHSD, it was the largest school district in the U.S. by geographical size. Students came from as far away as Gorman, Rosamond, Edwards Air Force Base, Randsburg and near Victorville. After Harold was interviewed for a shop teacher position at the brand new Palmdale High School in 1957, he asked if he could see where he might be teaching. "They told me no, because the shops hadn't even been built yet," Harold remembered.

Harold eventually taught all of the disciplines that made up the shop department, including machine, wood and electric shops, but photography was a special favorite. Over the course of his teaching career, his students went from using single sheet film to rolls of multi-frame film, and twin lens reflex cameras to single lens reflex cameras, all the way to digital cameras at the end of his teaching days.

Harold's interest in restorations and vintage collectibles was sparked in 1959 at a barbecue where a fellow teacher had an old restored car. Harold was inspired to buy a dilapidated 1936 Packard for $90 and his passion for restoration began. He started repairing and refinishing antique furniture and began collecting a variety of Americana, which today includes Coca-Cola memorabilia, soda fountain items, time clocks, ink wells and much more.

Harold and Addy became acquainted with Tehachapi when they brought their children, Randall and Gail, up to play in the snow. In the 1960s, a former college classmate of Harold's told him that he was a land buyer for Dart Resorts with money to spend and was looking for large parcels of land. Harold brought his former classmate to Tehachapi and showed him the Fickert Ranch, and got a phone call about six months later telling him that Dart had in fact bought the ranch and would be launching the Bear Valley Springs development. So, those who enjoy living in Bear Valley Springs probably owe a small debt to Harold's ability to see the possibilities of that beautiful property.

In the 1970s they bought land in Tehachapi and planted fruit trees. They built a house on their property in 1995, including a special room dedicated to Addy's crafts, as she is a talented and well-respected quilt maker.

With two vintage gasoline pumps and a host of petroliana – items associated with gas, oil and the early automotive era – the multi-skilled collector, Harold, decided that what they needed was their own vintage 1920s style gas station, so he built one. Named the "Halco Station" after the first letters of his name, the little filling station was stocked with all manner of items used by long ago motorists and travelers, including vintage cigarette and candy bar machines. Step inside and for a moment, you do enter a time warp, where everything you see is from an earlier era.

As Tehachapi property owners for close to 45 years, and residents for nearly 25, Harold and Addy were happy with their life in the mountains. "We love it here," Harold once said. "We have wonderful views of the mountains, a nice home and good friends here."

Both through his many contributions to the Tehachapi Heritage League and his own private collections, Harold helped ensure that America's history is both preserved and enjoyed. He was a gentleman with impeccable manners and he was patient and kind. He was an advocate for young people, and kept a boyish sense of fun throughout his long, successful life.