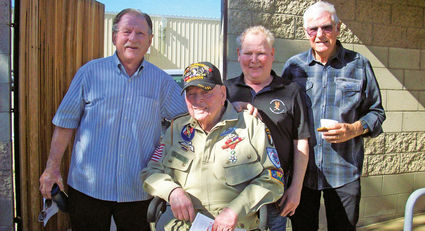 A letter was read from Congressman Kevin McCarthy that expressed his appreciation of the chance to honor and recognize our veterans in Kern County communities. "The selfless service and contributions made by these valiant soldiers, sailors, Marines and airmen is commendable. There is a special history of military milestones here, and I encourage you to seek out our local veterans and talk to them. Above all, take the time to simply say, thank you," McCarthy wrote.

Kern County Second District Supervisor Zack Scrivner attended the Mojave veterans Day Ceremony with his 10-year-old son. He expressed his gratitude for our nation's veterans and acknowledged the many veterans in the audience.

As keynote speaker, Dave Barr, began his talk at Mojave Air & Spaceport's Legacy Park, he said, "It's going to be commitment and attitude that will carry the day."

"I gave a lot of thought to what I was going to speak about this morning – all the different ways we could have lived our lives," Barr said. "But I wanted to focus on the things that we have in common."

"There are a lot of veterans here, I can see there are first responders and I know there are a lot of us who know what it's like to believe in something so strongly that we are willing to put our lives on the line for it," he said.

"In my life, I have had the privilege of serving four countries during times of conflict and my reason for doing so is I didn't want the 'bad guys' to win," said Barr.

Barr said, "You can look back at the heroes of our childhood. For me, it was my father and my uncles." One uncle served aboard a Navy destroyer at D-Day, another uncle was in the Marines and was a Beach Master at Guadalcanal and Iwo Jima. Barr's father was a crew member aboard a PBY flying boat during the attack on Pearl Harbor.

"I think we can agree that the heroes of our childhood possessed those same two qualities – commitment and attitude," Barr said. "They weren't afraid to stand up for what they believed in, no matter what the cost. Sometimes the cost was very dear."

"They stood for what was right in a world that had gone all wrong," said Barr. "They were the strong silent types; they were stoic; they were understated; they simply got the job done and went on about their business quietly. Unfortunately, that generation of heroes are leaving us at an all too alarming rate."

In the audience was a close friend of Barr's, 95-year-old World War II veteran, William "Bill" Galbraith, who served with the 101st Airborne, 506th Parachute Infantry Regiment (Band of Brothers) and parachuted from a C-47 into Normandy on D-Day, June 6, 1944, at the age of 20. Galbraith's son, Michael, was ever at his side helping his hero father with his walker.

Also in the audience was a man well-known to the world and in the skies of Mojave, Lt. Col. Dick Rutan, USAF (ret.) who served with Tactical Air Command during most of his two decades in the Air Force. He flew 325 combat missions in Vietnam, 105 of them as a member of the Super Sabre FAC (Forward Air Controller), a high risk operation commonly known as the MISTYs.

While on his last strike reconnaissance mission over North Vietnam in 1968, he was hit by enemy ground fire, forced to eject from a flaming F-100 Super Sabre and was later rescued by the Air Force's Jolly Green Giant helicopter team. Before retirement in 1978, he had been awarded the Silver Star, five Distinguished Flying Crosses, 16 Air Medals and the Purple Heart.

As Barr concluded his talk, he said, "When I was a young man, I used to salute my heroes for their courage and bravery, but now, as my generation and many of you older fellas who have served, we pass that sword of freedom on to the next generation."

"I salute those heroes today, not for their courage and bravery, but most of all for their commitment and attitude to service and duty," said Barr. 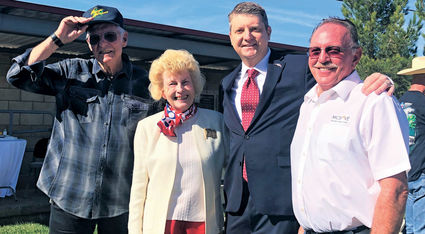 Barr is the author of four books. "Riding the Edge" details his trek around the world on his motorcycle. The second book, "Riding the Ice," tells of his incredible 13,000 mile winter journey across a frozen Northern Europe, Russia and Siberia on a 1996 Harley-Davidson Sportster. The third and fourth books are two volumes, "Four Flags," and tells of his odyssey as a professional soldier, seeing war at the "sharp end" while he served in the military alongside men and women in foreign lands.

He established the Dave Barr Foundation to support charitable organizations, both in the U.S. and overseas, that are dedicated to improving the lives of disabled veterans. The Patriot Express was created in 1996 as part of the Dave Barr Foundation. It is a series of motorcycle related events and fundraisers, designed to raise awareness while providing donations, support and counseling to the families of our injured veterans, including the troops who return from duty with long-term medical care needs.