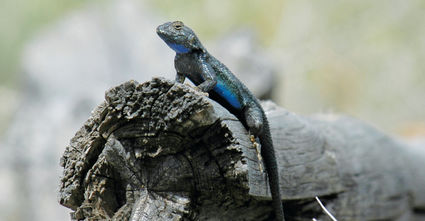 A male Western Fence Lizard or Bluebelly basks on a dead tree limb.

Despite the fact that we're now into November, the daytime temperatures are still warm enough that I'm still seeing lizards on a daily basis. These little reptiles are woven into the tapestry of life all throughout the Tehachapi Mountains, and there is at least one or more species found in practically every habitat type.

California is home to about 70 different species or subspecies of lizard and about a dozen of these can be found within the Tehachapi Mountains. Some of these are familiar neighbors you can encounter every day, while others are seldom seen.

The most ubiquitous is the Great Basin Fence Lizard (Sceloporous occidentalis longipes), a subspecies of Western Fence Lizards, which are better known as Bluebellies for the sky blue patches on their stomach and chin, which are especially vivid in males. They belong to a genus known as Spiny Lizards because their scales are rather rough and not smooth or snake-like.

Fence Lizards got their name because they are fond of climbing up old wooden fence posts or rails to bask, hunt for insects or engage in territorial displays. The craggy, deeply furrowed bark of Valley Oaks, Gray Pines and other native trees have provided these lizards with ideal habitat long before the first fences arrived, of course.

In addition to hiding and hunting on trees, stumps and fallen tree trunks, Fence Lizards are great climbers and also habituate rocky outcroppings and boulder piles.

In a stroke of luck for humans, the blood of Western Fence Lizards contains an enzyme that kills Lyme disease, so if a tick with Lyme disease attaches itself to a Bluebelly, it will no longer have Lyme after feeding on the lizard. When you consider that California is home to literally millions of Western Fence Lizards, that is a powerful form of protection against that debilitating disease.

Along with Bluebellies, the other most prominent and common lizards in the Tehachapi Mountains are the Western Side-blotch Lizards (Uta stansburiana elegans). Unlike Fence Lizards, these little sand-colored reptiles usually stay at ground level. If you walk along an old little-used dirt road, especially in semi-arid or desert-like terrain, you can often find Side-blotch Lizards scurrying just ahead of you, disappearing into the next small clump of weeds. Their common name derives from a bluish black spot behind each front leg.

Side-blotch Lizards, often referred to as simply Utas, are commonly the first lizard active in the morning – they are small and so are able to warm up quickly. Males are more colorful and often have blue speckles on their back, as well as orange, blue or yellow on their throats.

Since there are no big lizards like chuckwallas or iguanas in the Tehachapi Mountains, all of our lizard species are both predator and prey. The lizards themselves consume huge quantities of insects and other invertebrates, but they in turn are prey for practically every predator that is larger than them. And this list is long: snakes of all kinds, raptors and other predatory birds like shrikes and roadrunners, foxes, coyotes, bobcats, skunks and more.

Another widespread lizard species in the Tehachapi Mountains is the Woodland Alligator Lizard (Elgaria multicarinata webbii). These somewhat primitive-looking lizards have big heads, long slim bodies and tails and short legs. They are more secretive than Bluebellies and Utas, but are nonetheless quite common.

Alligator Lizards are also rather feisty – if you succeed in catching one, it will likely do two things: bite you and smear poop on you. Their bite is not serious, since their teeth are tiny, it is mostly just a firm pinch, but they make it clear that they would prefer not to be picked up.

With their bigger mouths, Alligator Lizards can swallow larger prey, and in addition to invertebrates they can feed on small lizards, young mice and even small bird eggs. Alligator Lizards frequently move with a snake-like motion, tucking their small, weak legs against their bodies and wriggling from side-to-side in an undulating motion. Alligator Lizards are mostly brown or gray, but may have reddish or orangish coloration on their backs, as well as small white accent marks.

One of the most unusual and beloved of our local lizards is the Blainville's Horned Lizard (Phrynosoma blainvillii), also known as the Coast Horned Lizard. These distinctive flat-bodied lizards look like miniature dinosaurs, with a crown of horns on their head and a fringe of pointed scales along their body. Baby Horned Lizards are exact miniatures of the adults, which make them even more endearing.

Blainville's Horned Lizards tend to have a very specific diet: ants. And not just any kind of ants – they prefer harvester ants. Ya know, the red ones that burn like a hot match when they bite you. Having such a specialized diet has pros and cons. If there are nearby ant colonies, food is easy to come by. If not, starvation is a real threat. Horned Lizard can eat other arthropods, like termites or spiders, but their clear preference seems to be harvester ants. 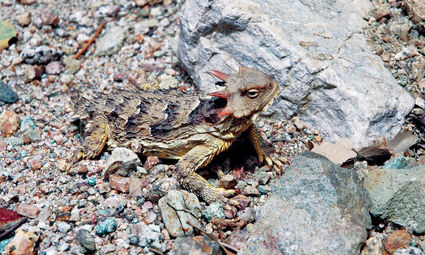 Horned Lizards have a prickly appearance but typically gentle dispositions.

For reasons that are not entirely certain, there are fewer Horned Lizards than there used to be. One of the major causes is likely habitat loss or habitat fragmentation, as well as native ants losing ground to non-native species. In any case, it is a matter of regret, for these unique, spiky oval-shaped lizards are beautiful and charming.

The assortment of lizards that share our landscape are interesting, fun to watch and important members of local ecosystems. We'll meet some more of them in a future column.

Jon Hammond is a fourth generation Kern County resident who has photographed and written about the Tehachapi Mountains for 38 years. He lives on a farm his family started in 1921 and is a speaker of Nuwä, the Tehachapi Indian language.