On Oct. 19, a special gathering of Rutan fans and Long-EZ builder/pilots landed at Mojave Air & Spaceport to celebrate the 40th anniversary of the production Long-EZ First Flight at Mojave. Close to 100 Rutan designs filled the flightline.

Mojave Transportation Museum volunteers organized this celebration and they thank Ben Watson of Seattle, Wash. for suggesting the idea. Watson is in the process of building a Long-EZ and is a licensed A&P mechanic.

"One of the greatest tim=es of my life," said Watson. "I got to literally hang out with my lifelong idols. I will never forget hanging out with the Rutan family and Mike and Sally Melvill. So amazing!"

Transferring your spirit into a machine is a special experience and it begins with the designer and continues with each person who buys plans, builds and eventually flies the machine. In this case, the designer is Burt Rutan, America's most prolific aircraft designer in the history of aviation. The Long-EZ is one of the most popular home-built aircraft ever.

People from all over the world purchased plans for the Long-EZ. Then they began ordering parts and building a composite airplane without a mold and, perhaps not realizing it at the time, they were imprinting their own spirit into their flying machine.

Dick Rutan and Mike Melvill constructed the first two Long-EZs side by side at Mojave and these aircraft are still flying today. Dick's "Ole Blue" (N69SH) is maintained and flown by Dustin Riggs and Mike and Sally Melvill keep their Long-EZ (N26MS) at Tehachapi.

Mike Melvill introduced his wife Sally before the luncheon and announced that they had just celebrated their 58th wedding anniversary to a resounding round of applause. Sally was seventeen and Mike was nineteen when they eloped.

"What an incredible event," said Jeff Cloud of Marianna, Fla. "Three guys, who together designed and flew airplanes around the world, one without refueling, and flew into space as a private civilian venture. What a great list of accomplishments!"

Tehachapi resident and former XCOR employee, Mike Massee, said, "It was great to have the EZ-Rocket out on display for the first time post-XCOR, and also to spend some great time with the Rutan family and friends."

"Although the day ended with gale force winds and we barely got the EZ back to the hangar, the morning was beautiful and everyone had a good time at the Dick-Burt-and-Mike show," Massee said. "Thanks to Doug Jones, Mike Laughlin, Eber West, Randall Clague, Dan Kreigh and Mel Langford with help getting the EZ back together and moved back and forth."

Visitors from around the world and four corners of the United States attended the anniversary celebration. Countries represented included China, Germany, Portugal and France. Guests from New Hampshire, Florida, Colorado, Texas, Arizona, Washington and Oregon flew to Mojave to witness the tribute.

A very special friend and Long-EZ builder was in the audience: Charlie Plumb, Vietnam Veteran/POW. Capt. Joseph Charles (Charlie) Plumb, Jr., graduate of the Naval Academy at Annapolis, was shot down May 19, 1967, while flying an F-4 Phantom on his 75th combat mission over North Vietnam, only five days before he was to return home. He suffered imprisonment for six years and was released in 1973. 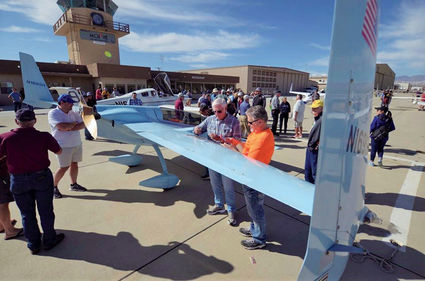 Burt, Dick and Mike answered questions from everyone for nearly one and a half hours. The only thing that kept people from asking more questions was the aroma of the delicious food that was being prepared. Grills Gone Wild from Bakersfield catered the event and everyone enjoyed the pulled beef, pulled chicken, baked beans and homemade coleslaw.

Dick Rutan said, "That's my kind of food. The coleslaw was amazing!"

As the afternoon winds increased, pilots were encouraged by airport Director of Operations to either tie their aircraft down securely or consider departing as soon as possible.

The Rutan family stayed and visited in the event center, even after everyone else had departed. It was a great reunion and time of reminiscing.