This month of November, when we give thanks for the blessings in our current lives and celebrate our beginnings in the new world, I have decided to dig deep into historical novels. Really deep in this review, clear back through the years and centuries and millenniums of time.

In 1980, Jean Auel gifted us the first book of her Earth’s Children series, “The Clan of the Cave Bear.” We met Ayla as a young child as she experienced a great and all consuming earthquake which left her an orphan in a wilderness she did not recognize. She was reluctantly adopted by the Bear Clan and the grand saga took off.

Auel didn’t just make up and imagine as she wrote her story, but she studied and visited the early lands of Europe and consulted with experts in paleontology studies. I think that is why the readers were able to believe the characters plausible and real. The wooly mammoths and saber tooths were bonuses.

In the recently published series, “The Replacement Chronicles,” Harper Swan offers an omnibus of three stories, “Raven’s Choice,” “Journeys of Choice” and “Choices that Cut Two Lives.” I won’t give away how Swan simultaneously has two lives touch, one 21st Century and the other Pleistocene, but she artfully does. She weaves the life of Raven, a young healer traveling rough and wild terrain like Ayla, while scientist Mark Hayek is set up as a “pawn in a cruel game.” Raven’s and Mark’s footsteps overlap those many years apart as two hearts try to save people in danger. Help comes unexpectedly and stretches logic with the impossible, echoing between ancestor and descendent.

Be prepared to stretch historical novels further by my third choice, “The Museum of Second Chances” by A.E. Warren. In this novel, man finds itself a few thousand years into the future, in a world of genetic engineering where humans are now divided by their altered DNA or lack of it. Sapiens are the lowest unaltered forms. The Medius are in the middle, slightly enhanced, and the Potiors born to families who can afford to buy the best DNA alterations. Potiors stand above all other humans as superior in every way.

It is not just this divide of humanity that causes angst within the communities across the land. There are also DNA experiments bringing back lost species and those successes are found in the community museums, extinct animals like those great wooly mammoths and saber tooth tigers along with more tame species lost to mankind such as the elusive chameleon. Then, there is also their experiments bringing back a race of Neanderthals. They too are being studied and used as highly admired exhibits. When the Sapien, Elise, believes the Neanderthal in her care, Kit, has the right to a bigger freer life, things start to change. The context is complicated but what in humanity is not? It poses questions of who we really are, where we are heading as a species and what we truly want our futures to become.

Our decisions today matter. It’s rather awesome really, the responsibility we have. Scary and awesome. Humans have been explorers from the beginning. New lands, waters, the sky and universe. Exploring has become more oblique and convoluted as we go. Now we seem left to explore deep into the human mind and psyche.

But before we go that far, let’s be sure to give the kids some prehistoric fun. “What the Dinosaurs Did Last Night” by Refe and Susan Tuma will keep your little ones laughing. Just like in “Toy Story” where the toys get up to play at night, so do these rascal dinosaurs. Beware!

Honestly, if you need a distraction as the holidays build, these books will take you completely away from Thanksgiving recipes and early Christmas shopping. Definitely a prehistoric reprieve!

A note from Midge 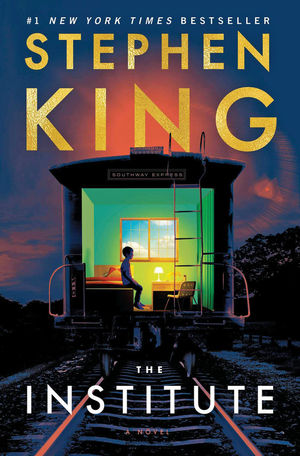 I’d like to report that, though after the fact, I did finish reading one of last month’s selections, “The Institute.” Stephen King’s newest novel was a heartbreaking, tense and nail biting story.

I’m happy to say that the ending was quite satisfying. As that is not always the case with King, it was a relief to me who loves a story that ties up loose ends well. I totally dislike a deflated feeling at the end of a book. I was not deflated!