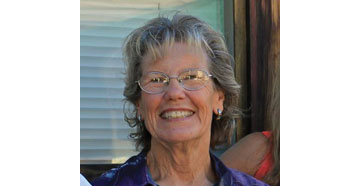 In the hills at the west end of Cummings Valley, hidden between Stallion Springs and Bear Valley Springs, is the rather isolated gated community of Hidden Oaks. About 10 years ago, Los Angeles architect Shanon Drayton and her husband, contractor Rick Arreola, found a gorgeous lot at the top of the mountain in Hidden Oaks quite by accident. A dirt bike accident near Tehachapi sent Rick to the local hospital. They met a realtor who wanted show them a piece of property. Of course, they bought it.

At the time the couple was living in Mar Vista on the west side of LA and for years they would come to their property and camp. Before they knew it, they had bought the lot next door as well. Finding themselves with an empty nest and ready to retire, they built a small home and a huge barn on the property and moved in during October of this year. The house is powered completely by solar batteries so, unlike most of Tehachapi lately, they have always had power.

Shanon is an 8th generation Californian. She is part of the Yorba family (Yorba Linda, Calif.). Her parents came from Fullerton and she grew up in Woodland Hills. She has a brother who is now living in South Carolina. She received her architectural degree from Arizona State University. Shanon loves horseback riding and has a horse that lives in their huge barn. She also has two dogs, three cats, a bird and five chickens.

Rick, also a California native, was raised in Venice. He is a middle child. He still enjoys riding dirt bikes but also enjoys riding mountain bikes. Now that he has finished the small house, he is working on plans for a larger home on the property.

Also living on the property is Shanon's friend and barn manager Lisa Baker. Lisa moved from Thousand Oaks along with her two horses. She also runs a mobile grooming service. The two met and became best friends when boarding their horses in Thousand Oaks. At the time Lisa had a pet sitting business and was there to take care of Shanon's animals. Lisa is a true Valley Girl, born in Van Nuys and raised in Woodland Hills.

Visiting often from Palmdale, Joe and Debbie Tasnady said they have always loved the four seasons in Tehachapi. When it came time to decide where they wanted to spend their retirement, it was that, and the fact that Debbie's father had once lived in Tehachapi many years ago. Those were the main factors in their decision to find a home here. Debbie's father had lived here for 28 years when she was younger and Debbie remembered coming to Tehachapi for visits. She calls it her family's focal point; the place where Debbie and her five sisters always congregated during holidays. Although her father has passed, the memories of Tehachapi remained.

Debbie was raised in San Fernando. She has three grown children, two boys and a girl. For 30 years she worked in the aerospace industry for Rocketdyne, then Pratt & Whitney and finally Boeing in Palmdale. She retired in 2011.

Joe was born in Somerville, New Jersey, one of three children. His family moved to California for his sister's health when he was six years old and the family settled in the San Fernando Valley. Joe said he graduated from North Hollywood High School. He worked in warehousing, first in San Bernardino and then back in the San Fernando Valley. He has a son and a daughter. Joe mentioned that his son is a race car mechanic in Northern California.

Joe and Debbie met at a building at Boeing in Palmdale where they both were working and have now been married for eight years. Between them they have nine grandchildren and their first great grandchild is on the way. Debbie is a crafter and Joe likes to work in wood. His favorite items to create in wood are chairs and birdhouses. He and Debbie are the adoptive parents of Charlotte, their tiny sweet Chihuahua.

A big Tehachapi welcome to Joe and Debbie Tasnady, and Charlotte, of course.