Enter the wind/exit the lights 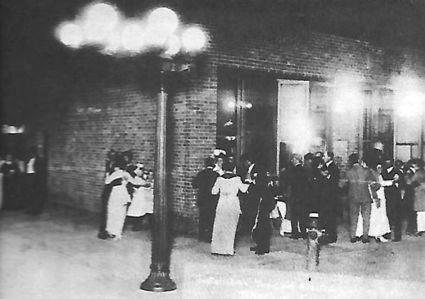 Tehachapi, a dancing town, celebrated the advent of "new fangled" electric lights being installed in the city by dancing in the street!

My earliest memories, as a child, involves lying in bed listening to the Mojave wind hitting the house with a strong whistling sound. It seemed that the dust and sand would find its way into the house and sometimes in the morning we would find very fine dirt on the floor; enough for my brother to make roads for his toy cars.

My father, Chauncey Davis, once had a gas station on the highway that, in the past, came through Mojave. Many travelers would stop for gas and ask, "Does the wind blow like this all of the time?"

My father would often reply, "No, sometimes it blows harder." Actually, that desert accelerated breeze had a pattern to its madness. We'd be conscious of a steady, howling force hitting the house and then there would be a sudden silence and there would be a complete stillness without a sign of a breeze. Perhaps something like the eye of a hurricane. Then, WHAM!, it returns with a vengeance.

It was like a giant taking a deep breath and then exhaling.

When I was nine, in 1937, we moved to Tehachapi and found a different kind of wind. It was firm and sometimes quite strong but could not compare with Mojave's windy tantrums. Still though, I guess the power company recently deemed us a dangerous fire area and turned off our lights. Actually, I had to cross Tucker Road (aka "Nightmare Alley") during the no-power-signal-light time. That's kind of dangerous, also.

That's not what I'm writing about. I'm just leading up to a better story. Gee, I do run on. A few days ago someone asked me when Tehachapi first had electric lights installed in their city. I told them that it was in 1915. Then the person said, "Well, it looks like we have just reverted to 1914!" Well, not quite. In 1914, Tehachapi had board sidewalks and horses still outnumbered automobiles. Also, when the wind blew, they just threw another log on the fire to stay warm. No power poles to spark things up.

Then, the installation of electric lights brought new wonders to the community with silent movies shown at the public building called the Opera House. One of the local teen girls, Margaret Erbel, played the piano to emphasize the mood of the plot. One of the old local papers advertised Charlie Chaplin, The Little Tramp, to be shown.

The big event to help celebrate the giant step into civilization was a Street Dance on the corner of F and Green Streets. It looks from the picture that they are mostly on the sidewalk next to the building. Possibly, they built a platform on which to dance for that night. None of the records state that information.

Tehachapi was a dancing town and each Saturday night at the Opera House the citizens would be doing the ever popular waltz to live music but even then a fast moving dance with just a two step beat was being done. It was called The Turkey Trot. By 1919 the Charleston became the most popular young people dance.

Those "new fangled" electric lights in most of the homes consisted of a single wire hanging from the ceiling with a solitary bulb attached at the end. Still, it certainly showed the cobwebs in the corners plainly enough.

Many residents were fearful of the new improvements and would cling to the old kerosene lamps for a while until they became accustomed to the marvels of the early part of the twentieth century.

Years later, in 2004, a mural was to be painted on a downtown Tehachapi wall depicting the famous Street Dance. The faces of the dancers are quite recognizable as they are the images of local residents. Notice that kids came to the dance, too. (The young boy depicted in the mural is Robert Taylor, who now works at The Loop newspaper.)

Guess we'll survive this latest "no lights" period. It's kind of nice to not watch the tube and to converse with one another. Then again, voluntary abstinence is fine but being told, "This is the way it's going to be," is another story!