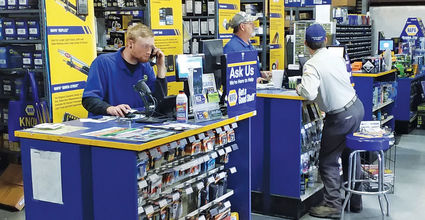 Ed Miller, well known to the vehicle repair shops in Tehachapi, is the new owner of the NAPA Auto Parts Store (dba Kern Auto Parts, Inc.,) located at 20633 South Street. Ed grew up in Lake Isabella and still resides there; he is married and a father of six.

Ed's personal history with NAPA Auto Parts is one of years of hard work and dedication, which were eventually rewarded with remarkable success. He began at the bottom, employed as a delivery driver at the age of 23. Over the years, he worked his way up to become a store manager and, in 2000, received a promotion to general manager of the three NAPA Auto Parts stores in eastern Kern County. Six years later, the store in Tehachapi opened its doors, with Ed playing a primary role in helping to design and build it "from the ground up." Finally, in June 2018, he became owner of the stores in Ridgecrest, Mojave and Tehachapi.

Of course, there are many other auto parts stores in Kern County, yet according to Ed, what makes his three NAPA stores stand out from the others is: "Our professional knowledge and our willingness to find parts that our competitors won't put in the effort to find. We're proud to go the extra mile for our customers. We do what others won't do or can't do." Ed also explained that his stores have the best "parts gurus" in the county, perhaps even in the state; as he noted with pride, "I have one 'guru' at each store; they can run down any part." When asked to provide an example of his "gurus" at work, Ed recalled that a couple of years back a truck driver had a major emergency when the air dryer (a vital brake component) on his 18-axle heavy haul trailer made in Germany suddenly went "kaput," immobilizing the trailer. Ed's team was able to rapidly locate the part in Germany and got it delivered on time so the truck driver could complete his scheduled haul.

Since acquiring the three NAPA outlets last year, Ed has doubled his inventory of parts, a truly impressive achievement. (Note: On the NAPA Auto Parts website it states, "Your local NAPA stocks auto parts, tools and equipment and many other items for heavy duty trucks, marine, and farming equipment.") Ed also operates a midday parts shuttle between stores, enabling needed parts to be rapidly moved between locations and placed in the hands of customers that same afternoon. His stores also make overnight deliveries five days a week on 95 percent of their parts inventory. Moreover, the highly responsive NAPA parts distribution system enables Ed to draw from parts warehouses in Fresno, Sacramento, Los Angeles and Phoenix.

Of course, like all successful business owners, Ed understands that his success is due to his strong and committed customer base. To show his appreciation, he gives back in many ways to our community. For example, Ed sponsors youth athletic teams (e.g., Little League baseball) in Tehachapi, while also supporting 4H and Future Farmers of America (FFA). A man of Christian faith, he also supports the Norbertine Sisters. Yet, as he explained to this writer, his "main focus is giving back to the children of the community"–hardly surprising considering he has six children of his own. As far as his future business plans go, Ed hopes "to grow and to add more stores in eastern Kern County [and] to bring more jobs to the area and the best auto parts experience for our customers."