New exhibit of Tom Clark Gnomes at the Tehachapi Museum 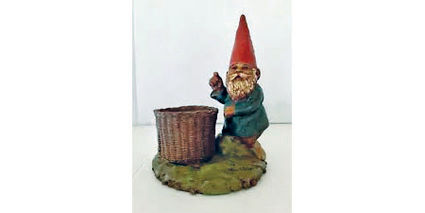 A whimsical Tom Clark created gnome with a garden basket made from crushed walnut shells of the type on exhibit at the Tehachapi Museum starting Nov. 1.

A new exhibit of fanciful gnomes will open on First Friday, Nov. 1 at the Tehachapi Museum. The collectible figures are shown in many different settings, including several created for Christmas. They were sculpted by Dr. Thomas Fetzer Clark, known as Tom Clark, a native of Elizabethtown, N.C. He trained in sculpture at Roberts School of Art in Aberdeen, Scotland, the Museum School of Art in Boston, Mass., and at City and Guilds of London School of Art.

Despite varying forms, gnomes have the common attribute of being able to move through the earth as easily as humans move atop it. A sixteenth century Swiss alchemist identified gnomes as a class of nature spirits comprising earth elementals. The class of gnomes has been considered to include satyrs, pans, dryads, elves, brownies and goblins, some helping plants and animals, some helping humans, some reclusive ones staying underground or in dark forests, perhaps hoarding treasure, and others interacting mischievously or even harmfully with humans.

The depiction of gnomes has changed quite often over the years and has remained different in different cultures. Originally many of them were conceived of as ugly, ground dwelling creatures that were less human than the gnomes of today. In contrast, modern sources often depict gnomes as diminutive, stout humans who wear tall, pointed conical caps and dress in solid colors such as blue, red or green. By contrast, Clark's gnomes are lovable, cute depictions of woodland creatures.

In the Textile Gallery at the Museum, Museum Director Judy Reynolds has just installed an exhibit of womens' winter hats from the 1930s to the 1950s. The exhibit also includes a man's top hat from the turn of the century.

The Museum store has just added "The Basques of Kern County," a history of the Basque people and a chronicle of those Spanish and French Basques who came to Tehachapi and Bakersfield from the 1880s and forward. It is available for sale, along with "The Long Road to Tehachapi," "The Handbook of the Kawaiisu" and other books about Tehachapi and the area.

The Tehachapi Museum offers appetizers and wine each First Friday of the month. The museum is located at 310 S. Green St. and The Errea House Museum is at 311. Both are regularly open from noon to 4 p.m. on Fridays, Saturdays and Sundays. For more information, call (661) 822-8152.

Tehachapi Treasure Trove is located at 116 E. Tehachapi Blvd., right across the street from the water tower in Railroad Park. We will be featuring a fiber and art show by Fiber Friday Frogs. Come meet the artists and see what they have to offer.

Gallery ‘N’ Gifts, located at 100 W. Tehachapi Blvd., will be all dressed up for the holidays.

Tehachapi Museum & Errea House is located at 310 and 311 S. Green St. Treasures from our local mountains and around the world will be featured on First Friday. Stop by for refreshments.

Sheridan’s, located at 114 W. Tehachapi Blvd., will be open for First Friday. Come share some refreshments, and browse our new fall collection. Mention our First Friday Special and receive 10 percent off your purchase Friday evening from 5 to 8 p.m.

Olde Vineyard Charm is located at 108 W. Tehachapi Blvd. Jennifer Liles with Arbonne will be there with her Holiday Line from 5 to 8 p.m. Come and shop for unique wine related and other gift items. Enjoy a glass of wine and snacks while you shop.