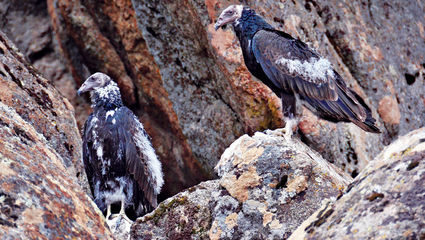 Heather Leibman, a talented photographer friend of mine who lived in Stallion Springs, took this photo of young Turkey Vultures near their nest, still with down feathers showing.

What in the world is going on?

You're driving in Tehachapi on a late afternoon in September or October, and you suddenly notice a few very large dark birds coasting through the sky, gliding down toward the treetops. As you look at them, you're aware of dozens more. "What the. . .?" you think to yourself as you watch these kite-like apparitions cluster around and then land in the tallest trees.

You're not alone. Countless people have had the same reaction as they experienced the annual Turkey Vulture migration through Tehachapi Pass in autumn.

Lots and lots of Turkey Vultures (Cathartes aura) soar their way through the Tehachapi Mountains each fall. How many?

Well, several years worth of counting and data collected by members of the Tehachapi Mountains Birding Club, led by Clark and Jean Moore, have enabled us to say with confidence that more than 30,000 Turkey Vultures pass through here on their way south every year.

Maybe even more than 40,000, since it is not possible to count every single bird, and counts of 33,000 plus vultures were tallied by club members, who maintained a month-long daily vigil from a panoramic vantage point atop Pauley Hill (east of the wastewater treatment plant, just behind Spirited Bead and Local Craft Beer Tehachapi).

These big soaring birds are hard to miss, with wingspans up to six foot across. Those vultures unable to get out of the pass, and over the desert by late afternoon stay for the night in Tehachapi. They cluster in any big trees that catch their attention, but over the years they have often roosted in trees near Philip Marx Central Park, as well as big Valley Oaks at the Mourning Cloak Ranch property on Old Town Road.

Once the lead birds select some trees in which to roost for the night, the entire cohort of vultures lands in the same general location. This is not a carefully choreographed process – as balletic as they are in the air, Turkey Vultures are somewhat ungainly when they leave the sky. A group of vultures taking up roosts for the night resembles a bunch of beginning snow skiers or roller skaters trying to stop suddenly and gracefully.

Latecomers often nudge or bump into birds that have already landed, sometimes causing the earlier arrivals to glide over to a nearby tree. I've even seen younger vultures accidentally land right on top of other birds, causing momentary irritation on the part of the trespassed bird.

Turkey Vultures in general get along quite well with one another, and some hissing, arched wing posturing and glaring is enough to settle most disputes. Turkey Vultures don't have a syrinx, the vocal organ possessed by most birds, so their disagreements are quiet affairs, marked by low grunts and hissing.

After a night spent huddled in a large tree, looking dark and somber like the undertakers in old Western movies, Turkey Vultures warm themselves in the morning sun and then take to the wing to continue their southward journey.

To conserve energy – they don't eat during their autumn migration south – Turkey Vultures find thermals, or rising columns of warm air. They circle inside this elevating column of warmer air, riding it like a spiral staircase.

A group of circling vultures like this is referred to as a kettle, and the practice itself is called "kettling" because it resembles the circular stirring of a large invisible kettle. Individual kettles regularly include hundreds of birds.

When they reach the top of the thermal, where the air cools to the point that it is no longer rising, the vultures unspool and at the very same elevation, they all arrow their way to the direction that they are headed, soaring straight almost in single file.

As they move through Tehachapi Pass, the birds generally move from the northwest to the southeast towards Oak Creek Pass. While working up on roofs in the fall, I've seen as many as three kettles at different elevations working their way higher: one near Old Town, with circling birds from ground level up to about 300 hundred feet, another closer to Tucker Road that extended from around 300 to 600 feet, and another towards Mountain Valley Airport off Highline Road that carried birds up over 1,000 feet before they topped out and soared southeast.

Which brings me to a misconception I have heard since I was a kid growing up in Tehachapi. People would see a swirling kettle of migrating Turkey Vultures, as least 50 or 100 birds or more, and they'd say, "look at all the vultures (or they might have said "buzzards"); there must be something dead." And the boy me would wonder to myself, "Now what creature's carcass could feed that many birds?" Short of a medieval battlefield or a buffalo slaughter, I couldn't imagine what might feed that many carrion eaters at once.

The answer, of course, was nothing, since southbound Turkey Vultures don't stop to eat. They focus on getting farther south where the days are warmer and thermals can still be easily found. So a big bunch of circling vultures in the fall just means birds rising in a thermal and has nothing to do with them locating a dead creature.

In fact, I am dubious that Turkey Vultures EVER circle plainly above a dead or dying creature, like movies and books often portray. Vultures tend to be cautious and circumspect, and I have seen them discovering, and then coming down to feed on a road kill, or dead deer in an oak clearing. The vultures make some sideways passes to get a better look at the situation and then they land some distance away.

If the scene remains undisturbed, they glide down and feed while still keeping a wary on their surroundings. Turkey Vultures seem to intentionally not call any attention to themselves or the object of their interest, and why would they? In the natural world there is nearly always competition for food sources, especially animal-based protein. So why would the vultures make a tight and noticeable circle high up in the air, pointing right at a carcass below, so that any American Ravens, Golden Eagles and other carrion eaters in the area would know right where to find it? 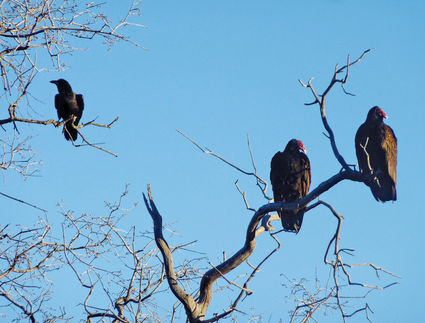 Kerri Esten captured this image of two Turkey Vultures and a nearby raven, showing the size disparity.

As it is, other birds like hawks, eagles and ravens will sometimes spot a kettle of migrating Turkey Vultures and fly over to join them in the rising thermal, using the vultures' keen awareness of air currents to locate a free lift to higher elevations. There's plenty of ascending air for all to use, but it just wouldn't seem prudent for vultures to advertise the presence of a highly limited food source.

So now you're aware of what longtime Tehachapi residents know well: those startlingly large dark birds drifting through this area every autumn are part of a great and spectacular yearly migration.

Enjoy the beauty of life in the Tehachapi Mountains..