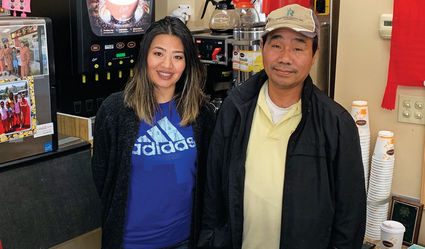 Chantha and her father John.

While it may not be politically correct these days to make generalizations about a particular ethnic group, it appears that some of the most innovative donut shops in Central and Southern California are operated by members of the Southeast Asian community. After creating donuts in Fresno for 15 years, Chantha Sokny Lay and her father John Pe bought Tea Donuts in Tehachapi last year. Chantha pointed out that at the time they moved to Bakersfield four years ago, "about 90 percent of the donut shops in Fresno were owned by Cambodians." Most people in Tehachapi don't realize that the prior owner of Tea Donuts was also Cambodian as is the Pe family.

One of the characteristics that appears to contribute to the success of these shops is their sense of work ethic and sense of family. Chantha thinks that her father is the perfect role model for both. Following their move to Kern County, John Pe taught his brother-in-law in Avenal to make donuts and began to teach his 13-year-old son and 8-year-old grandson how to greet customers and sell donuts. Chantha said her son Andrew (8) is the one most likely to carry on the family business as he is more hands-on. Although he works mostly on weekends and can barely be seen behind the counter, Andrew knows his donuts and his customers.

The family owns Foster's Donuts in Bakersfield and John Pe bakes for both that store and Tehachapi. Chantha's sister and brother-in-law run the Bakersfield store. After making the donuts for Bakersfield, Pe comes to Tehachapi around midnight and begins to bake for Tehachapi – cake, glazed, crullers, croissants, bagels, breakfast sandwiches and the biggest apple fritters you've ever seen. By special order, he will even make a birthday cake donut the size of a real birthday cake for the real donut fan. Every day Pe fills the 18 trays in Tehachapi and the 30 trays in Bakersfield. Tea Donuts is more that just a stop for breakfast. At lunchtime Tea Donuts adds a large selection of bagel, croissant and deli sandwiches. Coffee is always available, as well as cold blended and specialty drinks.

Pe opens the Tehachapi shop at 4:30 a.m., makes the coffee and runs the shop until Chantha arrives around 7 or 8 in the morning. He then goes to the back of the shop to catch a couple of hours of sleep before heading down to Bakersfield and starting all over again. There is no doubt of Chantha's admiration of her father. "He does more than anyone," she says. "He cleans the grease traps and fixes anything that needs fixing."

Tea Donuts is located at 807 Tucker Rd. Ste. #B, Tehachapi and is open every day, even holidays – although they may close early on holidays. Their regular hours are 4:30 a.m to 5 p.m.