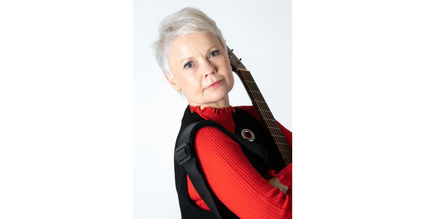 October is upon us and with it the heart of the Autumn season. The temperatures have dropped, the leaves are changing color and the general mood is a bit more contemplative. In this vein, starting in late September, Fiddlers Crossing has been presenting a series of diverse female singer-songwriters, each with her own unique approach to writing and performing songs that lean toward the more personal and introspective. The third and final artist in this series is Lisa Richards, who hails from far North Queensland, Australia. She will appear at the downtown venue for the first time on Friday, Oct. 18.

Richards describes her childhood as being "wild and unsupervised." Life has brought its share of challenges her way. Starting at age seven, her mother, who had substance abuse issues, was in a severe car accident that left her requiring full-time care, which Lisa and her older brother provided until her mother's passing some thirteen years later. Having been the victim of childhood sexual abuse, Richards herself developed a drug and alcohol problem starting at a tender age. She is completely sober today.

"There's no doubt that my childhood has affected everything I've done creatively and I've spent a lot of years getting my head on straight and learning how to live in the world," she says.

After leaving home at twenty, Richards spent time in both Austin, Texas and New York City before relocating in Canberra, Australia, where she now lives. Today, she travels to North America and Europe as often as touring and recording demands.

With a penchant for the underdog and the outsider, Richards writes and performs songs on guitar in the tradition of solo singers through the ages. Her guitar playing is sparse, percussive and rhythmic and her songs tell vivid stories of longing, loss, love and hope. With sharp observations, subtle humor and a ferociously sweet voice, she explores the complexities of life through a mix of folk, blues, roots and jazz. Her voice is distinguished by its singularity. Articulated with strength and precision, it can be girlish, tender and innocent or it can ring with hard-won experience and dark foreshadowing. Reviewers of her work frequently draw comparisons to such diverse artists as Billie Holliday, Björk, Cassandra Wilson, Patty Griffin and Suzanne Vega.

Richards' songs are unflinching in their honesty and directness. Her song "Before I was a Girl," for example, expresses the ambivalence of a young woman, who, having been a tomboy in childhood, now feels the crushing pressure from society to fit into the "tiny box" of what is commonly accepted to be femininity. "Life was easier," she sings, "before I was a girl."

Richards' songs have appeared on CDs alongside Adele, Nina Simone and Corinne Bailey Rae as well as being heard in film and television. Performances across the U.S. at the Telluride Bluegrass Festival, the Rocky Mountain Folks Festival, Merlefest, Kerrville Folk Festival, South by Southwest and others have established her stateside while tours to the U.K., Netherlands, Belgium and Australia have expanded her international audience.

She has released six albums of her own since 2002. Her latest, entitled "A Light From the Other Side," released in 2016, has met with universal critical acclaim. A seventh album is currently in the works.

"The world is a cornucopia of stories, all waiting to be told. The personal, the universal, the visible and the invisible. That's what humans have always done, collected and told stories," says Richards.

Fiddlers Crossing is at 206 E. F St. at Robinson St., in Downtown Tehachapi. Tickets may be purchased at Mountain Music, Tehachapi Treasure Trove, Tehachapi Furniture in Old Town, and Lucky's Barbershop, or online at http://www.fiddlerscrossing.com. They can be reserved by calling (661) 823-9994. Tickets to the concert are $20, and as always, coffee and goodies are included. The concert begins at 7 p.m. Doors open at 6:30 p.m.