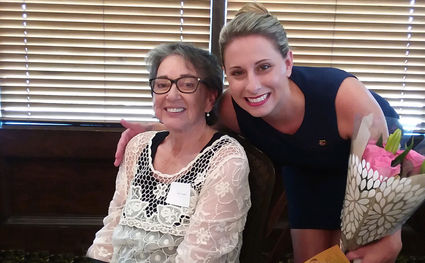 Katie Hill is a U.S. Representative for California's 25th Congressional District who lives in Agua Dulce, yet she has ties to Tehachapi because her grandmother, Sarah Campbell, lives here. Hill was the keynote speaker at a "Women in Politics Luncheon" which was sponsored by Democratic Women of Kern.

She began her address by introducing her grandmother, then went on to explain her reason for seeking office. As a young adult she wanted to become a nurse like her mother and grandmother, but an experience in a hospital emergency room changed her mind.

A young man, injured in street violence, died holding her hand. From the man's sister, she learned of his difficulty growing up. He had lived in various foster homes and never had the opportunities to develop to his full potential. This emotional experience prompted her to leave nursing and begin working at PATH (People Assisting the Homeless), a state-wide non-profit organization that works to end homelessness. Her experience within PATH motivated her desire to run for Congress.

Hill said being in Congress is not easy. It involves long hours and lots of travel between her district and Washington. She does it because she cares about people. She can do it, she says, because she comes from a family of strong women like her grandmother.

Being accountable to those she represents is most important to Katie Hill. Her top issues are addressing health care, rebuilding the middle class with policies that address income inequality and affordable housing. Climate change is also an issue, as well as getting big money out of politics.

Hill concluded her remarks urging more women to run for office. She noted that three-quarters of Congressional Representatives are men. She feels a balance would be better because men and women work differently. She urged young women, especially, to become involved and serve in elected office.

The Tehachapi Mountain Democratic Club meets on the first Thursday of each month (except December, July and August) at Big Papa's Steakhouse located at 1001 W. Tehachapi Blvd. You are welcome to come at 5 p.m. for dinner and/or at 6 p.m. for the meeting.