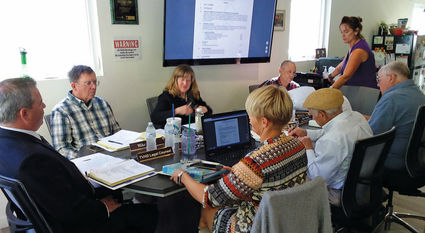 Tuesday, Sept. 17 was a significant day for the Tehachapi Valley Healthcare District (TVHD) in its ongoing efforts to repurpose the former (now vacant) hospital located at 115 West E. Street. At its monthly board of directors meeting, the district board, led by board President Mike Nixon, outlined its strategic plans for the old hospital, a concrete building comprising some 17,000 square feet and used since the early 1950s as an acute care hospital. The board of directors had recently conducted a detailed sight evaluation of the facility in an effort to ascertain the alterations/retrofits that will required to meet the board's new vision. 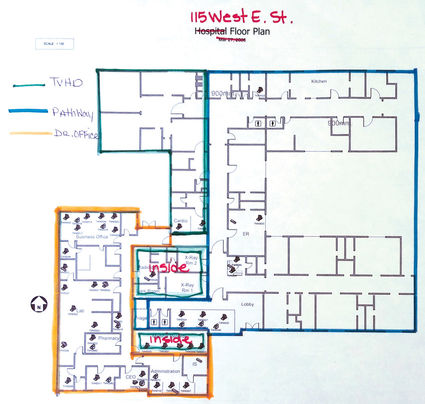 Floor plans for the old hospital.

And that vision embraces the following: A) doctors' offices (or offices of other businesses) to be located in the southwest corner of the building (the offices will be available to rent in a "cooperative-type" venture on an as-needed basis); B) an adult day care center to be operated by Mountain Pathways, which has been allocated to the eastern half of the building; C) offices for the TVHD in the northwest corner, as well as a large conference room and public meeting area; and d) a large mural that will cover the west wall of the facility (facing Jake's Stake House) depicting artists' renditions of the evolution and history of the hospital. According to Mr. Nixon, these and other initiatives should generate about $12,000 per month in rent for the Healthcare District.

Summarizing the board's efforts, Nixon stated: "We've brainstormed this and come up with some ideas....The [financial] return on the remodeling will really be beneficial to the district in the long run. The city is really happy with what we are trying to do....We created the concept and the vision. I figured we had enough talent in the district to have done all this in house without paying somebody to come in."

To bring its vision for the former hospital to fruition, the TVHD will now begin implementation of a three-phase process. The first phase got underway at the September 17 board meeting, when a request for proposal (RFP) for "Architectural Services" was approved by a unanimous roll call vote; the RFP envisages a competitive selection process to garner proposals from several architectural firms (proposals are due on October 23). After the basic architectural drawings have been approved by the City Planning Commission, the engineering process (second phase) will begin, and will encompass the mechanical drawings covering everything from heating, plumbing and electrical, down to the location of the light switches on the walls. The final phase will involve the receipt of bids for construction contracts for various aspects of the planned retrofit and renovation. The remodeling effort is estimated to cost $600,000 to $700,000; the funds will be drawn from more than three million dollars the district has set aside with the California State Treasurer, thus no new tax money or borrowed money will be required for the project.

In other business at the board meeting, Mr. Chet Beedle, the board's chief financial officer, laid out a staggering array of financial data that, even if it made this reporter's eyes roll back in his head, made clear that the TVHD was in top financial shape; indeed, the net cash balance for the month was "above projections," while the total net surplus for the month amounted to an impressive $143,356. Finally, the board discussed plans to seek proposals from qualified consulting firms for environmental consulting services pertaining to a proposed solar project at the new hospital operated by Adventist Health Tehachapi Valley; as a result, an RFP for an environmental impact study is scheduled for release in the next couple of weeks.