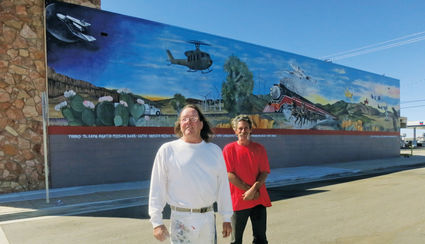 Mural painter Jedd Strange of Rosamond and his assistant Wayne Baxter of Willow Springs stand on Panamint Street in Mojave in front of Strange's new mural on the northern wall of the Mission Bank.

Artist Jedd Strange of Rosamond has put the finishing touches on a nearly block-long mural in Mojave that celebrates modes of transportation in that crossroads community.

The mural, moving from sunrise over the desert on the east end to sunset behind the mountains on the west end, features a mule team hauling a water wagon, the Southern Pacific Dayliner train, a diesel truck, a Huey helicopter, Virgin Galactic spacecraft, wind turbines, aircraft flying in the Mojave air races, the Soledad Mountain gold mining site and California poppies, cactus, Joshua Trees and bursts of tiny desert flowers.

Wayne Baxter, 56, of Willow Springs, assisted on the project.

The idea for the mural emerged three years ago.

"Cathy Hanson of the Mojave Transportation Museum saw me painting a mural in Rosamond and put me in touch with Erma Martin," Strange said.

"I am very happy with it," Martin said. 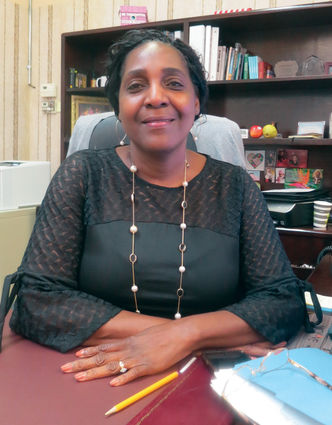 Bank Manager Erma Martin wrote the Kern County RENEWBIZ grant to fund the art work. The mural, which is 86 by 16 feet, features transportation and nature in Mojave.

The Mojave Chamber of Commerce, she said, plans to locate in the lot directly across the street, and the mural will make pleasant viewing

The empty lot will be transformed into a small park.

A scaffold accident delayed the mural project for a year while Strange recovered from two shattered heels. During that time, he painted a smaller version of the work at 86 inches by 16 inches, which hangs inside the bank.

On the west end of the wall, Strange included a raven, a bird that is ubiquitous in the region.

His next project is for the state visitor center at Saddleback Buttes, Lake Los Angeles. He plans to paint rocks and boulders that will blend into the environment.

"I'm going to make the building disappear," he said.