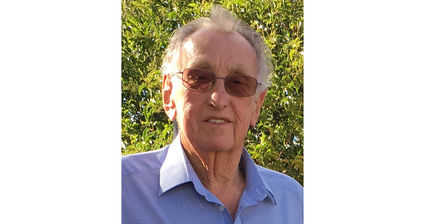 James Arnold Murray was known by his friends, family, neighbors and community as Jim and by grandchildren as Papa.

Jim was born on July 9, 1929 in Huntington Park, California to parents Alice and Arnold Murray. At 90 years old he passed away surrounded by his family in Bakersfield on August 28, 2019 after a brief illness. A memorial service will be held on Oct. 18, 10 a.m. at the Bakersfield National Cemetery.

Jim grew up in Downey, Calif. After graduating from Downey High School, Jim joined the Marines. As Corporal in the United States Marine Corps, Jim served as a Mortar Gunner in South and Central Korea. Jim often told stories of the hardships faced by the soldiers in the Korean War and his love of country and for the Marines never wavered. On June 25, 2014 Jim's dedication to country was recognized by then Assemblymember Shannon Grove when he was named the 34th Assembly District Veteran of the Year. In a moving ceremony at the State Capitol, Jim was able to share the pride he held in serving his country and encouraged others to realize the steep price of freedom. Jim's hearing was permanently damaged by the mortar rounds he manned in the Korean War but he never complained. He remained a proud Marine until the time of his death.

Over the years, Jim founded and pastored numerous churches, and changed lives through his dedication to others. From hosting a singing ministry group at a retirement home; counseling men in their most vulnerable moments at an addiction recovery center; ministering to the homeless on skid row; counseling young women at pregnancy centers; providing weekly meals for the homeless, and so much more.

Ministering to others was Jim's passion. Humor and wit were one of his best character traits and he always had a joke or story to share. He was kind, generous and non-judgmental. He loved politics and knew what was going on locally, statewide and nationally.

Jim also gave back to the community he loved dearly in every way he could. He wrote articles for both local papers and papers in Salton Sea and was in the draft stages of writing a book.

Jim met and married his sweetheart, Marilyn, whom he met in Downey, Calif. after his service in the Marines. They were married over 50 years before she passed away and went to be with the Lord.

Jim later found love with his wife Dorothy. They had been by each other's side for the last 15 years. Together they blessed others with their kindness, compassion and gratitude. Jim and Dorothy believed in helping others in the smallest and largest ways they could. They carried with them at all times "Blessing Bags."

These Blessing Bags contained essentials such as food, money, and toiletries. They also had an ice chest with cold water bottles in their car.

If they were out of bags, they would drive to the nearest McDonald's to get food and pass it out wherever they were. Never shy, they would pull over in busy traffic, stop on the street in the dark or feed a group in the park. Their kindness truly reflects the depth of their faith.

July 9 of this year, Jim celebrated his 90th birthday in Sacramento surrounded by his entire family. In attendance was his wife, three daughters, son-in-laws, grandchildren, great-grandchildren and friends. For two days the entire family celebrated Jim and his legacy. He was the star of the show and he loved every minute of it.