Life is so different for me now since the passing of my youngest son, Douglas. Not only do I try to keep up with my daily tasks at home, but I am trying to maintain his home and take care of his many feral kitties. I am overwhelmed with the feeding and caring of his personal cats and the wild colonies outside. I love them all, but need some help with trapping to spay and neuter. I cannot afford over $100 per animal and need to find some assistance from an organization that loves these little furry creatures as much as I do.

I am still organizing Plane Crazy Saturday each month at Mojave Air & Spaceport, even though it is difficult to press on because Doug helped me so much with each event. I know his spirit is with me each month and I hear his voice assuring me that things will work out. I pray a lot!

Our friend, Dick Rutan, was at the 2019 Reno Air Races a couple of weeks ago and sent some photos to me. He was one of the presenters of trophies to the air race winners. Other aviation notables were on hand as presenters as well, including: Mark Armstrong (Neil Armstrong's son); Clarence "Bud" Anderson, USAF (ret.) World War II triple Ace; former NASA astronaut Robert Lee "Hoot" Gibson and Clay Lacy.

"Hoot" Gibson was selected as a NASA astronaut while serving in the U.S. Navy. He continued to be promoted, eventually achieving the rank of Captain upon retirement from active naval service.

Before his selection as a NASA Astronaut, he was assigned to VF-111 and VF-1 and saw duty aboard the aircraft carriers USS CORAL SEA and USS ENTERPRISE. He flew combat mission in Southeast Asia in the F-4 with VF-111 and made the initial operational carrier deployment of the F-14 Tomcat with VF-1.

Of course, everyone knows who former NASA Astronaut Neil Armstrong was and his son, Mark, was pleased to represent his famous father at Reno this year. Armstrong was always unassuming and very humble, he loved talking about his work with the X-15, but was shy about talking about being the first man to walk on the moon's surface in 1969.

During World War II, while serving with the 363rd Fighter Squadron, 354th Fighter Group in the 9th Air Force, Bud Anderson flew 116 combat missions (480 hours) in a P-51 Mustang carrying the name of "Old Crow." He destroyed 16 and one quarter enemy aircraft in aerial combat and another one on the ground. Bud has the distinction of being a "Triple Ace."

Bud served for 30 years in the U.S. Air Force accumulating over 6,700 flying hours, first as a Triple Ace in WWII, then as a Commander of a squadron of F-86s in postwar Korea; and a wing of F-105 Thuds on Okinawa during the mid-1960s. In 1970, he flew 25 combat missions in F-105s as a wing commander in Thailand during the Vietnam War.

I like this quote in the foreword of Bud's book, To Fly and Fight, by Brigadier General Chuck Yeager: "In an airplane, the guy was a mongoose. It's hard to believe, if the only Bud Anderson you ever knew was the one on the ground. Calm, gentlemanly. A grandfather. Funny. An all-around nice guy. But once you get him in an airplane, he's vicious. Shot down 17 airplanes. Best fighter pilot I've ever seen."

Clay Lacy is a native of Wichita, Kansas, and a graduate of Wichita East High School. He started flying at the age of twelve at Orville Sanders Cannonball Airport, located at Tyler Road and Maple.

One of the first pilots to receive a Learjet Type Rating in November 1964, Clay was the Manager of Learjet Sales for California Airmotive, the Learjet distributor in the seven Western States. He placed first in the 1970 Reno Unlimited Pylon Race to become the 1970 National Champion. 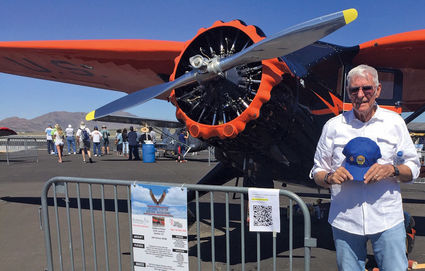 In 1971, he placed first in the last propeller unlimited cross-country race held. He followed that by winning first place in the Fighter Pilot Tournament held in St. Louis, and also placed first in the Jet Class of "The Great Race" from London, England to Victoria, British Columbia the same year flying a Learjet 24. Clay flew in every Unlimited Race from Reno 64 through Reno 72, also two LA races, Lancaster and 1970 Cape May, New Jersey. In addition, Clay flew in two Mojave Races; one in a four engine DC-7, placing 5th in a field of 20 P-51s, Sea Furies and others.

Dennis Sanders won the Gold Race on Sept. 15 flying the R-4360 powered Sea Fury Dreadnaught. He averaged a speed of 403.274 miles per hour.

Dick Rutan enjoyed walking around all of the classic aircraft on display.