One of the best ways to enjoy a Tehachapi apple: Drink it 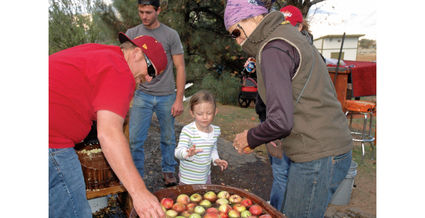 Pressing apples is a fun task for all ages, and even the very young can pluck washed apples out of a wheelbarrow full of water and toss them in the hopper.

Since the bright hot days of August have given way to the warm days and cool nights of September in the Tehachapi Mountains, locals can feel it in the air – apple season has arrived. And with that delicious time comes one of the finest products of an orchard: fresh-pressed apple juice.

Whether you call it apple juice or use the older term "apple cider" (not hard cider, that's an alcoholic drink of an entirely different nature), the sweet nectar that pours from fresh-pressed apples is simply unforgettable. When unfiltered, just as it trickles out of the apple press, fresh cider is a cloudy, honey-colored beverage that tastes like you were somehow drinking the perfect apple instead of eating it. When you compare this rich elixir with the watery, store-bought version of apple juice made from concentrate, well, there's just no real comparison.

One of the keys to epic apple juice is the sweet/tart blend of different apple varieties. You can get great apple juice using a single variety, but most of the finest cider is a mixture of different kinds of apples.

One of the best store-bought apple juices available is a mixture of varieties made by S. Martinelli & Company in Watsonville, California. Their juice is pressed from U.S. grown fresh apples and then flash-pasteurized, with no concentrates, no added water, no preservatives, no sweeteners and no additives of any kind. The Martinelli family has been making cider in California's Pajaro Valley for more than 130 years, and they always blend different apple varieties, including the Newton Pippin, an old apple type that you will never find in the produce section of a grocery store, but you drink it in practically every bottle of Martinelli's.

Lonnie and Cindy Latham on Adelante Trail off Highline Road are among the Tehachapi residents who eagerly await apple season and the delectable juice it provides. The Lathams gather friends and family members who take turns operating their vintage-style apple press, producing jug after jug of premium blended apple juice.

At least three generations are usually represented, with children playing and tossing apples into the press while older and stronger helpers operate the grinder that chops the apples, then twist the screw press to extract the juice, which is promptly bottled and refrigerated or frozen because it isn't pasteurized. The Lathams don't sell their apple juice, the fruit of everyone's labor is shared with those who gather to make it. Several of Tehachapi's different orchards, like Moessner Family Farms, do have their own apple juice for sale, however, and it is well worth looking for. Pulford's Appletree Orchard on Highline also has fresh apple juice available seasonally.

The process of making apple juice, whether automated or by hand, is fairly standard: first apples are freshly-picked, because they start losing moisture from the first day they come off the tree. The apples are then washed and sorted to remove any culls – the size and shape of apples that are about to be pressed doesn't matter, it isn't a beauty contest, but they should never be mushy or spoiling. Great juice requires great apples.

The apples are then chopped up into small pieces of glistening goodness, and then they are pressed to extract the juice. In an old-style press like the Lathams, chopped apples drop from the grinding hopper down into a cloth bag inside a circle of small wooden staves. When the bag is full, a wooden pressing lid is placed on it and helpers start turning the cast iron pressing screw, which slowly exerts more and more pressure until the liquid ambrosia flows out.

The pressed apple particles, once the juice has been wrung out, has the soft, fluffy texture of a sponge that is just slightly damp. The spent pulp is good for livestock feed or composting and not much else.

This year, try to treat yourself and your family to some fresh-pressed apple juice. It is a beverage that Americans have been savoring since long before the Revolutionary War, so think of it as both a wonderful-tasting living history experience and a contemporary pleasure. 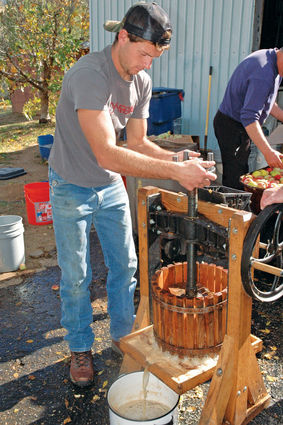