The four Majors brothers with the rebuilt machine at the Thunder on the Mountain car show at the 2019 Mountain Festival. From left, Russell of Tehachapi; Kenny of Lake Arrowhead, Calif.; Dennis of Walnut, Calif.; and Donald of Agoura, Calif.

In 1928, following his service in the U.S. Marines and before marriage would bring six children, a young Alvin Majors bought an Indian Scout motorcycle.

He paid $300 for the new Massachusetts-made vehicle, which served a dual purpose – to ride in hill-climbing competitions and as transportation to his job at various Los Angeles Department of Water and Power locations. He also used the motorcycle on the job to patrol the Los Angeles Aqueduct in the Antelope Valley and points east.

Majors became Reservoir Keeper for the DWP Fairmont Reservoir in the west Antelope Valley, which is the headwaters for the department's two hydroplants. As caretaker, he was responsible for monitoring the water flow and taking readings.

With a growing family and a company truck for transportation, Majors needed a garden tractor more than a motorcycle. In 1946 or '47, he dismantled the Indian and rebuilt it into a rototiller tractor.

"He used it to put in the first garden," his son Russell Majors of Stallion Springs said. "He needed to feed his family."

The new tractor did not work as well as planned.

Ultimately, Majors tore it apart and stashed the pieces in buckets in the barn.

Russell followed his father into a career at the DWP. After his dad retired, Russell collected the motorcycle parts in 1973 and kept them at his home in Panorama City for 30 years.

Russell retired in 1995. He and his wife Ann, a retired secretary, whose daughter Stephanie is an administrator in Los Angeles, moved to Stallion Springs, hauling the forlorn buckets with them.

Their sisters are Kathy, 77, of Las Vegas and Marilyn, 72, of New York, who cheered the project on from a distance.

"We took everything down to Agoura," as Russell and Ann tell the story. "The engine was all together. We said, 'Let's see if it starts.' The boys started playing with it. All of a sudden, poof! It takes off. There was smoke coming out of the garage.

"There were four boys behind it with the biggest grins. That was encouraging."

Each brother took responsibility for specific tasks, depending on their expertise. Growing up in the west Antelope Valley, the boys had hired out as farm and ranch hands. They brought skills and determination to the Indian enterprise.

Russell, who has a machine shop at his home, fixed the engine and did machining. Donald straightened out the frame and invented new parts as needed. Kenny, a master metal engraver, restored embossed lettering, handled artistic things and generally cleaned up the pieces. Accountant Dennis researched and sourced, interacting with the Indian Motorcycle club and locating oddball parts.

They found that the gauges were intact and not broken.

They located a rare original 1928 license plate made for such a vehicle.

They have the vehicle's original pink slip. 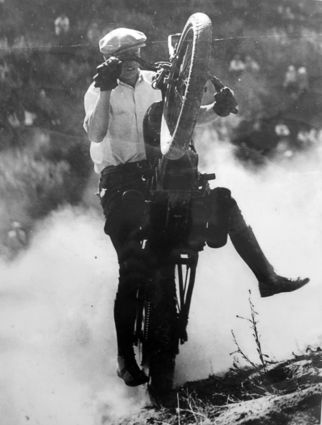 Riding his 1928 Indian Scout motorcycle, Alvin Majors won trophies at hill climb competitions around Southern California from 1928 into the early 1930s. Photo taken during that time at a hill climb.

The reborn motorcycle made its public debut at the 2017 T-Town Rumble fundraiser event for Heritage Oaks School.

"The reaction was unreal," Russell said. "People like to hear the story. It's fun to share the story. A lot of people can't believe it."

The Indian won the people's choice award at T-Town.

"I came home and called my brothers," Russell said. "I told them, people are interested in this thing."

The vehicle, carried in its custom trailer, has appeared in several other shows. At Thunder on the Mountain, it won first in class in the "over 30 years old" category.

The restored Indian motorcycle is a testament to the life of Alvin Majors, who was dedicated to his family. At one time, Russell said, before he had his own family, his father was the sole support of his own brothers and sisters.

"We did this to honor our father," Russell said.