A new year begins for AAUW 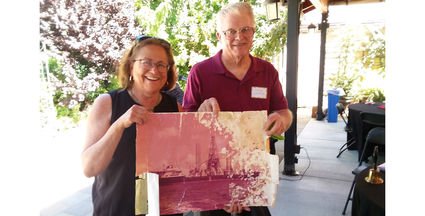 A luncheon meeting of Tehachapi Mountain Branch of American Association of University of Women was held recently at Wood's Pavilion. It marked the beginning of a new year of AAUW programs. President Laura Amstead welcomed everyone and introduced Board Members and Interest Group Leaders who described their responsibilities.

Keynote speaker at the meeting was George Jennings who is an AAUW member. He supports the goals of AAUW and was attracted to Tehachapi Mountain Branch by the Great Decisions group.

Jennings was born and grew up in Washington D.C. His father was employed by the FBI and influential in George's decision to work for the CIA. That work led him to establish his own company later. He related an incident about recovery of a sunken submarine that was complicated and sometimes humorous. His company assisted the CIA in the effort. He exhibited a well-worn map which highlighted the operation and captured the interest of the audience.

AAUW promotes equity and education for women and works for positive societal change. Membership is open to both men and women with a two-year or higher degree. Dues are $99 per year, which includes membership in the local, state and national AAUW. Call the membership chairperson at (661) 972-6508 for further information.