The guests at the Basque Dinner were seated at round tables in the street in front of the Errea House Museum.

Entertainment during the dinner was provided by Siyah Novinger singing songs in French, English, Spanish, Basque and Navajo. After dinner, Mike Mendiburo, a local resident of Basque descent, spoke about his family's history and the Basque families in Tehachapi in its early years. He raffled off four Basque cookbooks which he provided. Many of the guests who have attended all the dinners said they thought this was the best year so far. 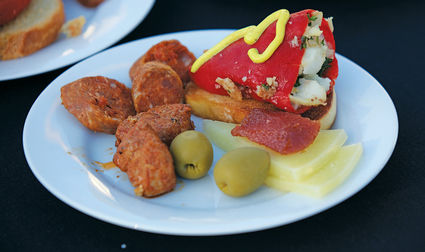 The appetizers on the tapas plate were prepared by Mary Cunningham.

The Tehachapi Heritage League would like to thank the sponsors that made the dinner possible: Mike Mendiburo, Mary Cunningham, Ameripride Linens and Albertsons. The Tehachapi Football Team helped with the setup, serving and cleanup. Many volunteers from the Tehachapi Heritage League assisted with cooking, set up, serving and cleanup to help make the event a big success. Special thanks to Mary Cunningham, Kerri Esten and Charles White for their assistance with the cooking. Judy Reynolds was responsible for the logistics, setting up and running of the event. Jon Hammond helped with many aspects of the event.

The dinner was a fundraiser to help fund the renovation and exhibits at the Errea House Museum, named for the family that lived in the house from about 1917 to the 1980s. The Erreas came to Tehachapi in 1906 from Spain and were part of the large Spanish and French Basque community in the Tehachapi area.

The Errea House Museum at 311 S. Green St. and the Tehachapi Museum across the street are open from noon to 4 p.m. on Fridays, Saturdays and Sundays. For more information, call the Museum at (661) 972-0958.