Tehachapi weather month-to-month, May through August

A typical June day in the Tehachapi Mountains, looking towards the original location of Old Town.

Tehachapi weather: it's a thing. Local residents talk about it, enjoy it much of the time, dread it at other times and speculate about how it will affect them. Our weather changes frequently. It can be warm, cool, hot, cold, breezy, windy, still, damp, wet or dry. All in the same week.

Tehachapi weather conditions aren't always that fickle, of course, and over time patterns have emerged. Humans tend to have short or at least unreliable memories about weather, saying things like, "It's never been this cold in May!" or "We never get rain like this" and other statements that may not square with the facts.

There are National Weather Service records for Tehachapi going back more than 100 years, and I've researched them to help form a clearer picture of what to expect for our area month by month.

Several columns back, I profiled typical Tehachapi weather for the first four months of the year. Here's the second installment – a summary of May, June July and August.

May - You'll use both your heater and air conditioner

May in Tehachapi is a month of classic spring weather, when we experience a mix of sunny days along with overcast blustery ones and even occasional storms, like spring in other parts of the temperate world.

Like April, however, May is a month when temperatures can fluctuate considerably from night to day, and swings of 50 degrees are possible, when overnight lows of 35 degrees can be followed by daytime highs of 85 degrees.

Most wildflowers are starting to fade in May and the foxtails and other native grasses are heading out, but grass is still green in many places and shiny new leaves are emerging from trees and shrubs.

On a beautiful 77 degree May day in Tehachapi, it makes you want to hit the repeat button and experience that pleasant, invigorating spring weather day after day. . . .

June - So long spring, it's been beautiful knowing ya

June is the month when summer officially begins, but in the Tehachapi Mountains it's definitely still spring. A few warm days back-to-back can give that summer feel to the air, but once the sun goes down the evenings tend to still get chilly (or even cold!). June may be the month when brides plan to have outdoor weddings, but in the mountains you need a back-up plan, because the weather could be calm and an ideal 78 degrees Fahrenheit, or windy and 30 degrees cooler.

Marine layers sometimes move inland and the humidity in the Tehachapi Mountains will rise, scenting the landscape and giving even dried grasses the smell of fresh-mown hay. Prevailing westerly breezes with cool moist air can make the early mornings feel like dawn on the Pacific Coast.

Despite the presence of some storm fronts that move through the mountains in June, the overcast seldom brings precipitation – there has never even been an inch of moisture recorded for the month of June. The wettest June on record was in 1993, when we got .82 of an inch of rain.

If a damp storm does appear, however, there is still the possibility of snow in the air, even though it's too warm on the valley floors to accumulate. True to form, a small storm in the early June of 2011 put a few snowflakes in the air and actually dropped some snow at higher elevations.

There are still wildflowers blooming in the Tehachapi area in June, especially our loveable state wildflower: California poppies. These brilliant orange flowers seem to benefit as the foxtail and other non-native grasses die down from a lack of water, and the perennial poppies that grow in yards, along driveways and in vacant lots in the area are at their peak in June.

The hot days of July and August are coming, so June is a last chance to savor spring.

July is one of the main two summer months in Tehachapi – summer officially begins in late June and continues until about September 22, but July and August are the two undisputedly summer months. And July is the hottest month of the year in the Tehachapi Mountains – the highest temperature ever recorded here, 105 degrees Fahrenheit, occurred in July of 1934.

Despite that fact, hot is relative – the temperature didn't reach triple digits at all in the month of July during 86 years of the past 105 years for which we have written weather records. In July when Bakersfield and the San Joaquin Valley communities are sweltering in day after day of 100 plus weather, and even the nearby Mojave Desert town of Inyokern is recording temperatures of 113 degrees Fahrenheit, Tehachapi is still only in the high 80s or low 90s. This is why Tehachapi becomes a magnet for people wanting to get out of the heat and be somewhere that they can be comfortable in the outdoors, away from the ever-present hum of the air conditioner.

While summer thunderstorms are weekly occurrences in much of the Midwest, in the inland ranges of California, a summer thunderstorm is generally considered a rare and welcome treat. Towering cumulous clouds appear over the mountains, becoming massive thunderheads as the day progresses. Humidity rises and the air grows still, until a stirring breeze appears just before the first warm raindrops splat on the sidewalks, streets and dusty dry ground.

Then the clouds overhead open and sheets of rain pour down, sometimes accompanied by hailstones pattering on car hoods and old buildings with sheet metal roofs. Lightning flickers and flashes and thunderclaps rend the air, frightening nervous dogs and small children with the booming and rumbling. And then within an hour or two it's over, with clouds breaking up and moving through the mountains, leaving a cooler, fresh-smelling earth behind. When we're lucky, the rain is substantial enough to settle the dust and water the landscape a bit.

It's good to be in the mountains in July.

August - The most stable weather of the year

August has some of the most stable weather of any of the twelve months in the Tehachapi Mountains – daily highs average in the mid to upper 80s, nightly lows are in the low 60s. And that's typical August weather, day after pleasant summery day.

When you mention to some people that you live in Tehachapi and they make an inaccurate reply, it's usually one of these two: either "Oh, you live in the desert!" (wrong); or "Oh, it's hot there! (also wrong).

We live in an inland mountain range that gets infrequent summer rain, and the Mojave Desert is nearby, but Tehachapi is located in the mountains, not the desert. And with regards to how hot it gets in Tehachapi, here's a quick illustrative question: in the past 50 years, do you know how many years have recorded a temperature of 100 degrees or more in August? Only 3 out of 50 – in 1962, 1971 and 1978. Only once since 1978 has the mercury reached triple digits during the entire month of August. So, describing Tehachapi as a hot place is pretty laughable.

We do always have a few hot spells during the summer, but they're bearable, especially considering we have both clean air and low humidity, which keeps the heat index down. And since we're a geologic divide between two huge areas (the Mojave Desert and the San Joaquin Valley) that see plenty of 100 plus temperatures in the summer, the weather seems even cooler by contrast. 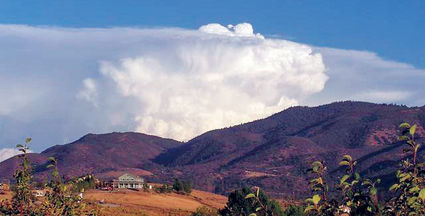 An elongated, layered lenticular cloud hangs over the Tehachapi Valley in blue June skies in the late afternoon.

A drive up the hill from Bakersfield is a dependable opportunity to see the outside temperature drop steadily, if your car is equipped with an exterior thermometer. By the time you hit General Beale Road, it's already a few degrees cooler than the city of Bakersfield, and as you head up Highway 58 you keep dropping a degree every few miles. By the time you reach the Tucker Road offramp, the temperature is as much as 15 degrees cooler than it was down in the valley. And you're thankful, once again, that you live in one of the most geographically pivotal places in California – the Tehachapi Mountains.