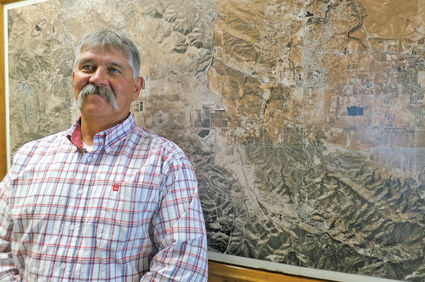 Tehachapi-Cummings County Water District Pipeline Superintendent Alex Steele, 62, retiring after 41 years with the district, in front of a topographical map at district headquarters.

The Tehachapi-Cummings County Water District honored retiring Pipeline Superintendent Alex Steele as a "steady countenance" who has served the district for 41 years.

Bob Jasper, the first water district manager, recruited him and encouraged him to stay with the district when other jobs promised to lure him away. Steele began as an apprentice pump plant mechanic. A temporary assignment as pipeline superintendent became a permanent one.

He has worked under all four managers of the district.

The district board adopted a resolution recognizing and honoring Steele on Aug. 21, 2019 at its meeting at district Brite Lake headquarters.

"I'm pretty busy," Steele said of his retirement. "It's a different animal to get a handle on. I have had structure my whole life. Now I can do what I want."

Steele is an organizer of youth football and a woodcarver. He and his wife Mary Ann have been married for more than 30 years. He has four children with Mary Ann – daughter Jenna, 14, a freshman at Tehachapi High School; Nick, 22, who works for World Wind & Solar; Jake 25, who plans to train as a wildland firefighter; and Tawnya, 27, who works for a state fish hatchery in Oroville. His older daughters are hairstylist Bresha, 37 and realtor Amanda, 39.

In other water district business, District Manager Tom Neisler said that California Senate Bill1 (2019), which would counter new federal wildlife regulations, "is an attempt by the state to keep onerous and non-productive regulations in place," and would restrict access to State Water Project water. Neisler said he expects the Senate and Assembly will pass the bill but he is not sure what Gov. Gavin Newsom will do when the bill reaches his desk. "He has been positive so far on water-related issues," Neisler told Forde Files. "This bill would be very negative to California water interests. It appears to be hung up in Assembly at this time, so it may not get to his desk...." 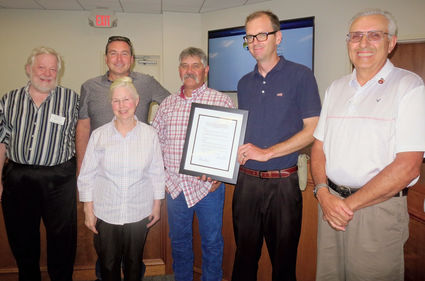 The water district board of directors present a resolution to Steele on Aug. 21. From left, Jonathan Hall, Robert W. Schultz, Kathy Cassil, Steele, board President James Pack, Rick Zanutto. Steele began working for the district when he was 20.

The district's State Water Project allocation is now 75 percent, which equates to 14,475 acre feet of water. "We are seeing later planting and increased irrigation as the summer rolls along. As we have plenty of imported water, this is good news," Neisler reported.

Neisler has purchased 50 percent of the required natural gas supply for 2022.

Operations Manager Troy DePriest reported that Pump Plants 2 and 3 were on backup emergency generator power for seven hours on Aug. 7 due to an SCE underground power outage between the plants.