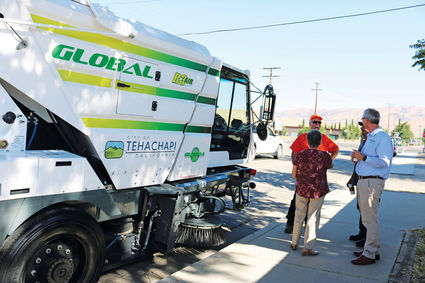 Coffee with the Mayor and City Manager at the Coffee Mill on Mill Street had a new look on the morning of Aug. 15. The City's new street sweeper from Global Environmental Products was on public display and sweeper operator Dale Miller and City Fleet Coordinator David Carvalho were on hand to answer questions. Carvalho is responsible for the maintenance of all City vehicles including the police department vehicles.

The new sweeper replaces the City's 20-year-old sweeper that would no longer meet state emissions standards in January 2020. The new sweeper has only one engine while the old one had two so it uses only half the fuel dollars. It has been in use within the city for the last two weeks and is like a huge vacuum sweeper. "We call it the Dyson," said Carvalho, "It creates less emissions and less dust." The sweeper cost approximately $250,000 and is fully compliant with the new state emissions requirements.

Operator Miller said that the sweeper has amazing maneuverability with a 12-and-a-half-foot turning radius making it possible to turn around in a single lane. "I've tried it out on all the new islands on Tucker,"said Miller, who also now uses it for the City parking lots.