14 years later, it's a Tehachapi Walmart!

Walmart initiated the process of building a 154,569-square-foot Supercenter in Tehachapi 14 years ago in 2005.

A resistance movement delayed construction and spurred community engagement on an unprecedented scale. One hearing at the high school gymnasium drew more than 700 advocates for and against building the Walmart.

"I'm overjoyed to see this come to fruition and to have this for Tehachapi and our residents," Mayor Susan Wiggins said, recalling one public hearing in which area residents – some elderly and in frail health – appealed for the construction of the store.

Ong is responsible for Walmart's new stores, remodels, special projects that include site development and store expansions, Sam's Clubs remodels (up to Jan. 2019) and fuel stations in California and Hawaii. On Monday mornings, she said, she is on the road or in the air.

"The fun part for me is grading and laying of the foundation," Ong said. 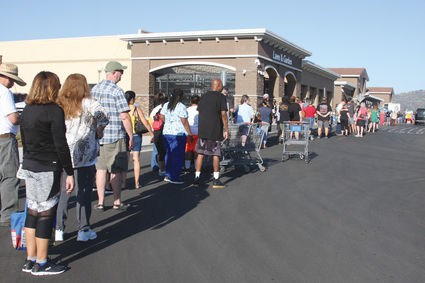 Shoppers lined up hours before the grand opening Aug. 7.

A high school graduate at 16, Ong earned her civil engineering degree at the University of Philippines at the age of 21 and a Project Management Professional certification from UCLA extension. She worked for various companies prior to signing on with Walmart. Ong said she always wanted to be a civil engineer, like her grandfather, who owned a construction company.

"When my father came home from work, he would put his hard hat on the table. I would put it on and walk around the house in it."

When asked to fill out career choices while in school, she said, "I would leave the second and third choices blank."

On July 1, Ong handed the keys to the empty building to Field Project Manager Diane Mangram, who brought it to life with display units, signage and merchandise. Mangram has opened 60 stores in her 33 years with Walmart. Store Manager Amy Garcia fulfilled the task of hiring hundreds of associates and supervising stocking of the shelves.