Kelcy's, one of Tehachapi's oldest restaurants, hosted the Tehachapi High School graduation Class of 1969. Known to those classmates as both Trusty's and Kelcy's Restaurant, as a change of ownership occurred in 1969.

Memories were shared and a traditional teen meal of hamburgers, fries and a milkshake were enjoyed by the guests. For dessert was a slice of Kelcy's signature dish, pie a la mode.

"We're very proud to have hosted the class members and, starting with Mountain Festival weekend, Kelcy's will be open again on a full time schedule," said Kelcy's current owners, Bill and Virginia Sheridan. 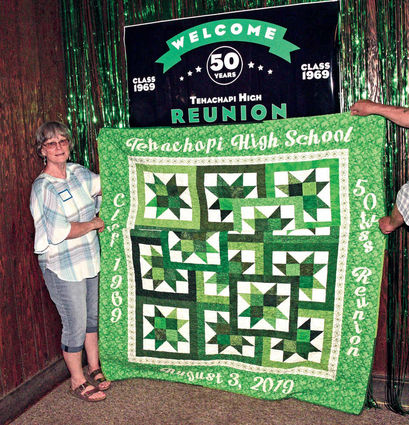 1969 classmate Ann Moore made this Warrior Green memory quilt, which was raffled off to a lucky fellow class member.