It is important to have dreams at every age in your life. Tom Reilly, master warbird aircraft restorer, has had his share of dreams restoring aircraft and flying them to the EAA AirVenture annual fly-in's in Oshkosh, Wisconsin.

Tom said being at Oshkosh is a dream come true.

"Oshkosh is the biggest and the best air show in the world. It's the icing on the cake to finally get it here," Tom said.

Tom showed determination and perseverance when he flew his rare XP-82 twin Mustang to the 50th Anniversary celebration at Oshkosh, a dream that stretched out for 10 years. Tom likes to take projects that people say can't be done and restore them to flyable, award-winning restorations.

The restoration project in Douglas, Georgia, began after aircraft restorer Tom Reilly discovered the complete airframe on a farm in Ohio. Reilly then scoured the earth seeking engines, propellers, and a multitude of other XP-82 parts to continue the restoration. Ten years later it first flew in 2018 and then was a show stopper at Oshkosh EAA Air Venture 2019.

Quoted from an article online ("The XP-82 Makes The Journey To AirVenture" from http://www.aero-news.net): "Our airplane, -83887, went to NACA (the predecessor of NASA) in Cleveland, Ohio, immediately after its first flight on April 15, 1945, sometime in August or September of 1945," Tom said. "It was a test bed for an eight-machine gun center pod, underwing rockets and a radar pod. It flew with NACA, from mid-1945 until December 15, 1949, when it skidded off the side of an icy runway, buried itself in the mud and bent the center section. The military said, 'Well, we don't need it anymore.' They already had a second P-82 so they simply scrapped it. A soon to be very well-known aircraft collector from Newbury, Ohio, named Walter Soplata found out about the slightly bent XP-82 before the military could scrap it and paid $300 for the airplane and hauled it to his Ohio farm."

The North American Aviation XP-82 was the last American piston-engine fighter ordered into production by the U.S. Air Force and was requested by General 'Hap' Arnold to escort B-29s. P-51 Mustangs couldn't keep up with the 300 mph B-29. In October 1943, the North American Aircraft design team began work on a fighter design that could travel over 2,000 miles without refueling.

The Twin Mustang was developed at the end of the prop-driven fighter era and at the dawn of the jet age after World War II.

During the Korean War, Japan-based F-82s were among the first USAF aircraft to operate over Korea. The first three North Korean aircraft destroyed by U.S. forces were shot down by F-82s.

It was neat to read that Col. Bud Anderson (retired U.S. Air Force), 357th Fighter Group triple ace and pilot of P-51 Mustang 'Old Crow' with more than 116 combat missions during World War II (without receiving a single hit from enemy fire), returned home just before the war in Europe came to a close and was assigned to Wright Field in Dayton, Ohio, as a test pilot for the P-82.

Congratulations to Tom Reilly and his team for their 10-year effort on the restoration of the magnificent XP-82 Twin Mustang. I would have loved to have heard it fly overhead. What music to the ears of an aviation nut like me! http://www.youtube.com/watch?time_continue=18&v=YFBxT5Ubt2U. 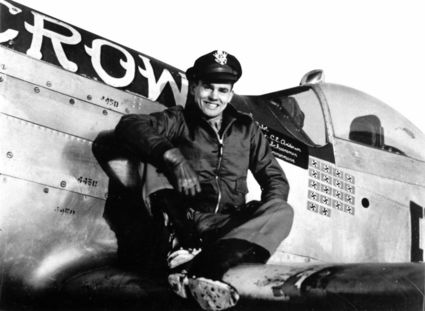