The City of Tehachapi: Then and now

Looking north on Green Street in Downtown Tehachapi, in 1916.

Tehachapi has one of the prettiest downtown areas in Kern County, and it keeps getting more attractive, thanks to ongoing efforts by the City of Tehachapi and local business owners. There are pocket parks, landscaping, benches, vintage-style street lights, brickwork, top quality signage, tastefully painted buildings and more.

There is an overall forward momentum, and a feeling that higher standards have been established. Both residents and visitors alike appreciate the welcoming and picturesque appearance of our town – all of it framed by the surrounding embrace of the Tehachapi Mountains, visible in every direction. So, you may wonder, is this how Tehachapi always looked? In answer to that question, allow us to provide a brief tour of Tehachapi through the years. . . .

After untold centuries of being home to the Nuwä (Kawaiisu or Paiute) Indian people, the Tehachapi Mountains began to be settled by pioneer families in the 1850s. These early arrivals established farms, ranches and homesteads scattered throughout the area, in Tehachapi, Brite, Cummings and Bear Valleys.

The original community center was established in the west end of the Tehachapi Valley by James Williams in 1869. He built a hotel that would become known as The Mountain House and a small townsite began to form around it. Williams first called the town Williamsburg, but eventually he and most everyone else were using the name "Tehachipa."

When the Southern Pacific railroad going through the Tehachapi Mountains was completed in 1876, however, the depot was placed four miles east of William's townsite, and the new community that grew up around the depot became the focal point. The new town, its spelling changed somewhat by the railroad to the current spelling "Tehachapi," with the "a" and the "i" transposed, grew while the earlier one, now called "Old Town," faded. The depot was the center of town and still is to this day.

In its infancy, Tehachapi was a typical frontier town, with mostly wood frame buildings and dirt streets, which tended to be muddy during the winter and dusty in the summer. The sidewalks that did exist were wooden and were more like small decks that extended from the front of the buildings whose owners could afford them.

Periodic fires tended to claim these wooden buildings and as business owners became more prosperous, red brick imported by railcar began to be incorporated into the downtown buildings. The town bought a horse-drawn water wagon and paid the constable to sprinkle the streets to keep down dust during the dry months, and added 19 kerosene street lights, which had to be lowered and lit every evening at dusk and then extinguished at dawn.

Improvements continued as the 20th century dawned: the "Town of Tehachapi" was incorporated in 1909, and electricity arrived in 1915 – an event that was celebrated with a street dance, which is commemorated by the historical mural on Tehachapi Boulevard across from the Railroad Park.

Then on July 21, 1952, the area was hit with an earthquake that registered 7.3 on the Richter scale. The unreinforced brick and masonry businesses of downtown were no match for the quake, and they collapsed into heaps of rubble, while the wood frame residences mostly emerged with little damage. So while a few landmark buildings survived, like the Tehachapi Depot, BeeKay Theatre and Community Congregational Church, most of the rest of downtown had to be rebuilt from scratch. The structures put up by a now-cautious populace tended to be single-story, well-reinforced buildings.

A tour of Tehachapi through the years

The town continued to grow at a stately pace – the population reached 3,161 by 1960, and had only increased to 4,126 by 1980. The downtown then looked like something from the 1950s, which it was: the vintage Burger Spot, still open and serving good food today, began in 1956. Kelcy's is another authentic legacy restaurant, and in 1980 was one of the few places to eat in town.

There were no national chain restaurants represented and few chain stores – the only ones were locally-owned franchises, like Sears, Montgomery Wards and Western Auto, with national names but strictly local owners. Tehachapi High had about 500 students at that time, and they would cruise their cars on Tehachapi Boulevard like a scene out of the movie American Graffiti, meeting in a dirt parking area referred to as "The Four-Way," which is now home to the Water Tank Plaza building that houses Country Real Estate and Dahlia's.

Passenger train service had been discontinued in 1971, and the depot was closed and derelict-looking. The packing sheds on Tehachapi Boulevard, once the scene of bustling activity as they handled potatoes, pears, apples and peaches, were also mostly shuttered. Economic activity began to shift to the strip malls located along the Tucker Road corridor. When Taco Bell opened on Tucker Road and Valley Boulevard in the 1980s, it was a momentous occasion and there were dozens of cars lined up for the drive-through.

Then the turnaround began in the 1990s, when city population had reached about 5,000 people, and continued into the 21st century. City officials with some vision, like former City Manager Jason Caudle, knew that Tehachapi's downtown area was unique and part of the area's regional identity. "Stand at the corner of Green Street and Tehachapi Boulevard and look around," Jason would say. "You'll know immediately that you're in Tehachapi. That's the kind of view that makes us different and special, and it's worth fixing up."

And there has been steady improvement since: the depot, after being destroyed by fire, was replaced with a newer version that looks identical but is built to much higher standards; after sitting as a roofless, burned-out hulk for 14 years, the BeeKay Theatre underwent a beautiful restoration; next to the BeeKay, a former neglected parking lot became the inviting Centennial Plaza; several old packing sheds have been revitalized to become popular destinations in downtown, including one that is home to Kohnen's Country Bakery; there are now bike lanes to encourage cycling; there are many celebrations, including First Friday art parties on the First Friday of every month and much more. The area is now commonly referred to as Downtown Tehachapi, worthy of a capital letter.

And the improvements keep coming, with the Freedom Plaza project and Tehachapi Visitors Center at the corner of Tehachapi Boulevard and Curry Street, and our brand new Adventist Health Tehachapi Valley hospital north of Highway 58. 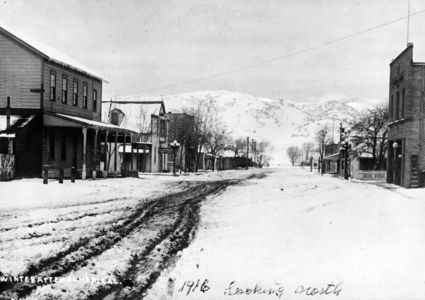 Looking north on Green Street in Downtown Tehachapi, in 2014, before the old Masonic Lodge was turned into the Tehachapi branch of the Kern County Library.

Tehachapi is still a great place to grow up and raise a family, and a fun and relaxing place to visit. Our actual population within the city limits is approaching 9,000. The official figure is higher, because a paperwork maneuver condoned by the state allowed the city to annex CCI, so inmates are counted as city residents to increase tax revenue. The greater Tehachapi area has a total of closer to 35,000 when combined with all those living in the outlying areas. We are a growing, thriving community with a proud and interesting past and a bright future. We cherish our history even as we look forward to more good things to come.