Over the picket fence 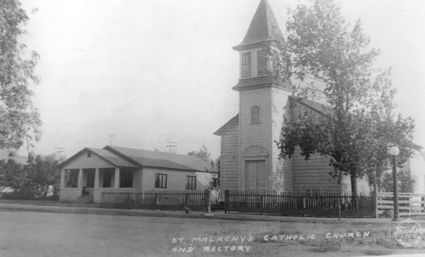 When I was no more than 12, in 1940, I used to spend some time in the afternoons sitting on the front steps of our home on Curry and F Streets. I would either have a book or perhaps just sit there petting the dog. Of course, my ulterior motive was to see if the 13-year-old boy I liked would be riding by on his bike. His happening by at that particular time was not accidental, for he would always "happen by" and we'd talk for an hour. Things were so simple in those days. He would park his bike on the sidewalk and I'd stand by the picket fence.

As the months progressed I finally turned 13 and was allowed to walk to the drug store soda fountain with him where he would buy me a root beer. I never cared much for root beer but I never said so. They cost a nickel. He kept saying I should have a root beer float but I had never had one and was afraid I did not know how to consume one. Finally, he just ordered us both one of the "R B Floats" and I watched him and found it easy to handle. After a few months I was allowed to go with him to the Sunday Matinee movies at the BeeKay Theatre. We always walked the block distance from my house. We got home in broad daylight from our date.

The picket fence between our house and F Street was a sturdy, nondescript color. Sort of a grey/brown/green hue. If my mother was out in the yard changing the water or planting bulbs, people walking past would stop and exchange a few words. Often they would be invited into our F Street entrance for a cup of coffee in the kitchen of the vintage house.

The old house was built in 1880 but the pickets did not arrive at our house until about 1936. They used to surround the old St. Malachy Church down the block on the corner. The old building, constructed in 1887 looked like a church should: smallish but tall and stately with a bell tower whose bell rang before Mass. A nondescript color picket fence surrounded it making an interesting frame on the property. We used to watch the parishioners of the Catholic Church walking down the sidewalk by our house as they went to Sunday morning Mass.

In 1936, the first old church structure was razed and replaced with a larger building which sustained no structural damage in the '52 quake and still stands today. With the construction of another church in 1967 on Mill and E Streets, the building was sold and now houses Bank of the Sierra.

The first thing to be eliminated at the construction site was the picket fence in front of the church. Various people in town were happy to take them home with them. The pickets which have been in place on the corner of F and Curry Streets for 83 years are showing their age. In fact, there are signs of dilapidation. Actually, one might say, they look their age. The house is still lived in by a family member and she, my niece, gave me permission to call attention to the antique fence. I have great affection for it. It's been a long time since I talked to my boyfriend over the fence and many casual conversations have been shared over the fence throughout the years by passersby. But, I still do not like root beer.