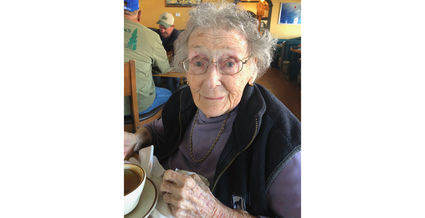 Andrea (Andy) L. Briscoe, 92, passed away peacefully on July 10, 2019, in her Golden Hills home, surrounded by her family. She was born in Los Angeles, Calif., on Aug. 26, 1926, and was raised by her adoptive parents, Charles and Maude Brady. She graduated from Immaculate Heart High School of Los Angeles in 1943.

Andy started her career in 1945 as a grocery checker at Thriftimart-Fitzsimmons in Van Nuys. She held various jobs thereafter including grocery checker at Jim's Fallbrook market in Woodland Hills, newspaper distributor for the Los Angeles Herald Examiner and Valley Green Sheet (aka Los Angeles Daily News) and manager of Banks Stationary store in Santa Barbara. She was also a homemaker and raised four sons.

Andy met her husband, Loring Briscoe, in 1945 at Thrftimart-Fitzsimmons and they married in 1946. They lived in the San Fernando Valley for 30 years, and after their divorce, she lived in Santa Barbara and Oroville, Calif. Realizing Loring was the true love of her life, they reunited 16 years later and moved to the Golden Hills area of Tehachapi in 1993. She truly enjoyed sharing the four seasons and quiet solitude of the Tehachapi area with family and friends.

Andy had a passion for camping, fishing, cruising, bird watching and her cats. She took her children on backpacking trips and spent entire summers with them camping on the upper Kern River. Andy was an avid fan of the Los Angeles Angels and enjoyed watching baseball and classic movies. She also enjoyed outings with her loving caregiver of seven years, Patricia Mitchell, and had a close personal friendship with Dr. Ana Reyna, who kept a watchful eye on Andy during her later years. She always enjoyed spending time at the Tehachapi SENIOR CENTER and was a popular customer at local restaurants.

Andy was a loving wife and mother. She is predeceased by her husband Loring, and survived by her four children, Kenneth (Laura); Paul (Rose); Glenn (Alba); and Wayne; her five grandchildren; and one great grandchild.

Private memorial and internment will be at Oakwood Memorial Cemetery in Chatsworth, at a later date. Donations in Andy's memory can be made to the Tehachapi SENIOR CENTER, 500 East F St., Tehachapi, CA 93561.

Wood Family Funeral Service was entrusted with her care.