Solar will provide 85% of hospital power 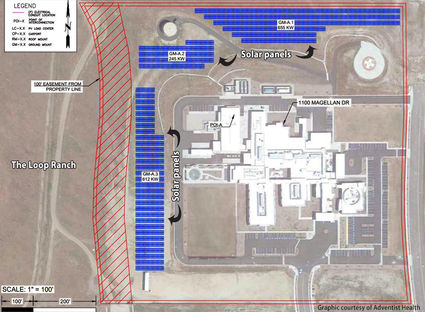 Adventist Health Tehachapi Valley plans to build a four-acre, 1.5-megawatt solar installation on the hospital grounds that will offset 85 percent or more of the hospital's electricity consumption.

The offset may be as high as 95 percent, according to the planners.

The project owner and developer, together with the Adventist solar portfolio advisor, presented the proposal to the Tehachapi Valley Healthcare District (TVHD) board of directors during the July 17 board meeting at the district headquarters, 305 South Robinson St.

The project wraps around the hospital building on the west and north sides in three arrays of 665 kilowatts, 245 kilowatts and 612 kilowatts. A preliminary plan placed the entire project along the west side, but planners changed the design to avoid encroaching on a 100-foot wide city easement.

"This is the crown jewel," Ohrel said of the Tehachapi project.

Adventist is paying for the installation and will purchase the electricity from the Austin, Texas-based ENGIE.

ENGIE and Adventist are negotiating a 20-year Power Purchase Agreement (PPA) with an option to renew. The lifespan of the project is 30 to 35 years.

The American-made solar panels will produce 2,729,434 kilowatts annually and, over the course of the 20-year contract, will keep 51,610,848 pounds of carbon dioxide out of the air – the equivalent of planting 400,000 trees or not burning 2.1 million pounds of coal, according to ENGIE and Adventist press releases.

At the end of the contract, Adventist will have saved around $3.7 million in electric bills, Adventist Communication Manager Harold Pierce said.

The project requires the approval of the City of Tehachapi and will undergo the California Environmental Quality Act (CEQA) process.

"Once we get the PPA and CEQA, then the project can move forward," Nave said.

ENGIE will own, operate and maintain the solar installation for the life of the system. The 3,510 panels are southfacing, ground mounted. Ohrel said that the panels present no glare or danger to airplanes using the nearby Tehachapi Municipal Airport. Several of his company's installations have been built safely next to airports, he said, one of them in Shafter.

Groundbreaking for the solar project is planned for November, with completion by May 2020, Pierce said.

The project is an extension of Adventist's faith-based mission to provide healthcare and promote a wholesome approach to life, Adventist said.

"It [the mission] compels us to build healthier communities, and that includes doing everything we can to reduce greenhouse emissions that contribute to pollution and can lead to chronic health conditions," Adventist Health Central California Region President Wayne Ferch said. " The solar project is a vital step toward making our communities better places to live."