Exhibit of matchbooks featured at the Tehachapi Museum 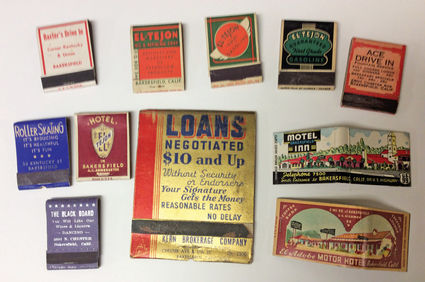 From a large collection of matchbook covers, these are from Bakersfield: Bakersfield Motel Inn, El Adobe Hotel, El Tejon Motel, The Black Board Bar, El Tejon Oil and Refining, and Kern Brokerage (a large book of matches measuring 3 by 4 ½ inches).

The Tehachapi Museum is featuring a collection of matchbooks in the Community Case for August First Friday on Aug. 2 from 5 to 8 p.m.

Matchbooks have been around since 1892 when Joshua Pusey patented the idea of paper matches. The tips were dipped in a solution of sulphur and phosphorus and stapled to a piece of cardboard. The Diamond Match Company promptly purchased Pusey's patent. In 1894, a company salesman named Henry Traute got his first order for 10 million matchbooks featuring ads for Pabst beer on their covers. An order for 30 million matchbooks from tobacco maker Bull Durham quickly followed.

The matchbooks were not a commercial success at first, in part because the first matchbooks were actually quite dangerous. It was discovered that if matchbooks were given away for free, they could be used to sell other products. Soon matchbooks were offered to customers of tobacco products, or left in the ashtrays of coffee shops and motels for the convenience of diners and overnight guests.

Some phillumenists collect covers based on the company that made the matchbooks such as Diamond, Atlas, D.D. Bean, Federal, Lion, Monarch and Ohio. Many other collectors organize their covers based on categories such as those with a date on them; matchbooks produced for World's Fairs, covers for coffee shops and cafes and those featuring different railroad lines and national parks. Thousands of matchbook designs were created during World War II with some covers being patriotic.

Manufacturing of matchbooks peaked during the 1940s and 1950s, then steadily declined because of the availability of disposable lighters and various anti-smoking health campaigns. Recently, matchbooks have begun to regain some of their popularity as a "retro" advertising item, particularly in high-end restaurants.

See more of the collection at the Museum, starting on First Friday. Appetizers and wine will be served. The museum is located at 310 S. Green St. and is open from noon to 4 p.m. on Fridays, Saturdays and Sundays. For more information, call (661) 822-8152.

Tehachapi Treasure Trove is located at 116 E. Tehachapi Blvd., right across the street from the water tower in Railroad Park. We will be featuring Alice Khteian and her denim apparel. Join us to meet Alice and enjoy art, fun, food, wine, good conversation and music by the ever-popular Art Larson on clarinet.