The California Wing Civil Air Patrol Aerospace Education Science Technology Engineering Math Academy (AESA) was a success for 48 eager cadet students. It's virtually impossible to share every detail and activity which was jam-packed into seven days.

Naturally, Flap, told his stories about his experience with the variety of military aircraft flown during the Vietnam war and post war era, including the B-52, the B-2 stealth fighter and the SR-71 blackbird spyplane.

Toni shared her military career in the intelligence field and duty stations. Also emphasizing the lack of duty positions and limitations for female service members during this period and her post military educator career.

The Flanagans were presented with a special Vietnam War 50-year-anniversary commemorative pin and a signed declaration by the president. Col. Alan Ferguson presented them with a CAWG patch and CAP challenge coins.

During the week long STEM activities, cadets learned from a variety of well-trained aerospace educators how to build and operate CAP STEM kits. For instance, first Lt. John Anderson taught the skills to design, build and fly, and Chris Devine held an amazing indoor drone class and competition for the cadets.

The flight simulators were the highlight of the STEM academy classes, taught by Capt. Bob Nadeau, an experienced commercial pilot, and Maj. Cathy Collom, a private pilot. The weekend rocket launches and the flying of paper and model airplanes culminated the cadet's hard work in the classroom.

The AESA would not be complete, without the 412th TW/CC/LL/PA and Lt. Col. Radvanyi arranging of the flight line asset tours of the F-22 and F-35. Cadets took part in dressing up in bomb gear at the EOD to watch a small explosive detonation. Luna, a specially trained bomb dog, was present with her handler. Some cadets learned how to operate one of the robots used in the location and detonation of bomb devices. It was amazing to see what takes place at the Air Force Research laboratory facilities, as well. It was a thrill for the cadets to have their first ever airplane flight onboard one of the CAP Cessna aircrafts.

Another success for the STEM academy was the open house held for local government and Edwards AFB officials to have an opportunity to visit with CAP AESA leadership, Lt. Col. Kenneth Endrizzi, and meet the CAP AEMS and enjoy lunch with cadet cadre. The distinguished guests were impressed by the cadets in their levels of education, maturity and future goals as a result of being a member of CAP. They brought new hope in future funding of the CAP STEM AESA programs.

Col. Roger Dunn, the AE Director, and AE team members would like to express their appreciation to the 412th TW for hosting the annual AESA Academy, and to all of Team Edwards who helped launch this year's Aerospace Education STEM Academy and made it another high flying success. Col. Dunn is known for his commitment and dedication in forming a large group of well educated Aerospace Education members (AEMs) and CAP Aerospace Education Officers, to bring STEM to schools throughout California. Through the CAWG AE mobile STEM unit program, those who would otherwise not be afforded the introduction to science, technology, engineering or math classes, or view the 15 CAP STEM kits, which are designed for K-12, is now seen in school parking lots, or air shows, or government events and CAP STEM Academies. You will see the CAWG Mobile STEM unit traversing the roads to bring a brighter future to our youth for a successful tomorrow. 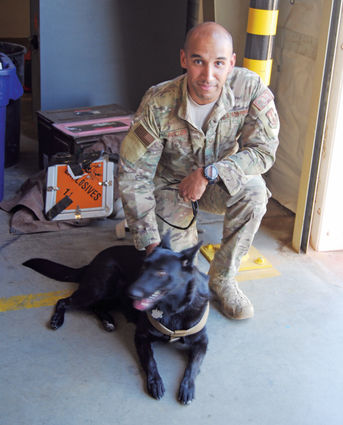 Luna, a specially trained bomb dog, with her handler.

Civil Air Patrol, the longtime all-volunteer U. S. Air Force auxiliary, is the newest member of the Air Forces Total Force. In this role, CAP operates a fleet of 560 aircraft, performs about 90 percent of continental U.S. Inland search and rescue missions as tasked by the Air Force rescue coordination center and is credited by the AFRCC with saving an average of 82 lives annually. CAP's 61,000 members perform homeland security, disaster relief and drug interdiction missions at the request of federal, state and local agencies. In addition, CAP plays a leading role in aerospace/STEM education and its members serve as mentors to over 25,000 young people participating in CAP's Cadet Programs. Visit http://www.GoCivilAirPatrol.com or http://www.CAP.news for more information.