Church volunteers from Christian Life Assembly and Tehachapi Mountain Vineyard Church, along with other volunteers, clear away a large pile of discarded tree trimmings at Hays Street and I Street.

The Tehachapi Police Department held a second cleanup day collecting more than 10 tons of debris in a neighborhood on the North side of town involving volunteers from the community.

On Saturday, July 13, nearly 22,000 pounds of bulky debris was collected from one of the oldest neighborhoods in Tehachapi. The area between Mill Street and Hayes Street and between the airport and North of Tehachapi Blvd. was the focus of more than 31 community volunteers.

"We came out again to this neighborhood because the work wasn't done after the first attempt," said Chief of Police Kent Kroeger.

On June 22, two dozen volunteers joined the police department and collected 16,700 pounds of debris from the same neighborhood. The combined effort totaled 38,620 pounds (19.3 tons) of large trash, appliances and bulky items the residents needed help removing from their properties.

"There are a lot of people that want to have clean properties but are physically or financially not able to do it without help. We provided that help to make a difference in the neighborhood's quality of life," said Kroeger.

The Neighborhood Improvement Project is a Community Oriented Policing project designed to improve the quality of life for residential neighborhoods. The program combines the efforts of law enforcement, the community it serves and builds stronger working relationships to aid in public safety.

The Neighborhood Improvement Project began several months ago with police officers going door to door in the area asking about the concerns of the people who live there. That feedback was reviewed and a plan was put together to help the residents.

The Ring Security Camera discount program was part of this project to help individuals feel more secure at home. The next phase will include identifying properties that church organizations can adopt to help maintain their properties and visible police presence in the neighborhood. 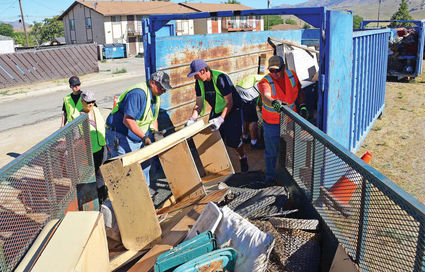 Within four hours six 40-yard roll off dumpsters had been filled.

Additional cleanup days are in the works in different areas as part of the Neighborhood Improvement Project.

Waste Management provided the trash bins and hauling of the debris, Tea Donuts fed the volunteers with a generous donation and the City of Tehachapi provided safety gear.