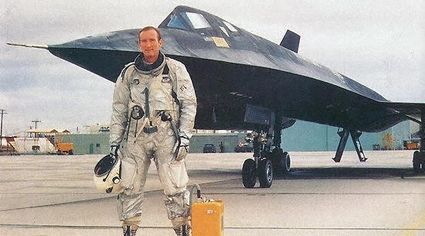 Bob Gilliland in front of a SR-71 Blackbird.

Robert J. "Bob" Gilliland, call sign "Dutch 51," who has logged more experimental supersonic test flights above Mach 2 and Mach 3 than any other pilot, passed away on July 4. He was the SR-71 project test pilot for and personal friends with Kelly Johnson, at the Lockheed Skunk Works.

Bob was present at all of the SpaceShipOne launches in 2004, and told me, at the Rutan Brothers Birthday Bash held at Mojave Airport in 2008, "I flew all three variants of the Blackbird – the A-12, YF-12A and the SR-71 as they rolled off the Lockheed assembly line."

Bob Hoover, Bob Gilliland and my husband, Al Hansen, visited with one another at the Oct. 4, 2004 SpaceShipOne X-Prize flight at Mojave. Bob brought his good friend Louis Zamperini to the Hansen Hangar for breakfast before the launch that day.

Louis Zamparini was the world champion miler. He had been on the Olympic team that went to Berlin in 1936. He had gotten into trouble because he climbed up a flag pole and tore down the Swastika in Germany. He had been shot down in the South Pacific and floated on the ocean for 47 days in a life raft, landed on some little island, and finally was picked up by the Japanese and taken to Japan as a prisoner. They knew that he was a great world-renowned track star and miler. At one time they broke his legs so he could not run again.  Lou's story was published in a book, "The Devil at My Heels."

Gilliland was born in Memphis, Tenn. and during World War II, at the age of 17, he volunteered for the U.S. Navy and was training to go into submarines when he was accepted in the United States Naval Academy at the war's end. As a midshipman he served on various warships, including a heavy cruiser, destroyer, carrier and the battleship USS North Carolina in which his GQ (General Quarters) station was the 16" gun turret.

He graduated in 1949 with a degree in engineering from the United States Naval Academy and received word a few weeks before graduation that the newly formed U.S. Air Force (formed in 1947) wanted volunteers from Annapolis and West Point.

Many midshipmen chose the new and growing Air Force because of the promising opportunities to fly in the latest jet aircraft. They were promised immediate entry into flight training and that appealed to Bob. He completed flight training at Randolph Field, Texas and soloed in a North American T-6 Texan. His advanced training was at Chandler, Ariz. flying the Lockheed F-80 Shooting Star. His next assignment was to an operational fighter group flying the Republic P-47 Thunderbolt and the Republic F-84 Thunderjet.

Bob volunteered for a combat tour in Korea in 1952, flying the F-84 in a fighter-bomber unit at K-2 Airport, Taegu, Korea. In 1952, he returned to Germany to fly the F-86F Sabre. Later that same year, he was assigned to Eglin AFB in Florida as a test pilot in fighter test and the U.S. Armament Center.

After his active service with the USAF, Bob joined the Tennessee Air National Guard and flew a variety of aircraft, including: North America P-51, Douglas A-26, Lockheed RF-80, Republic RF-84 and the Lockheed F-104A.

In 1960, he became a civilian test pilot for Lockheed, flying all models of the F-104 Starfighter. He worked closely with the Air Forces of Canada, Japan, Germany and Italy and made the first flight of the Fiat-Aeritalia F-104S produced in Italy under license from Lockheed. 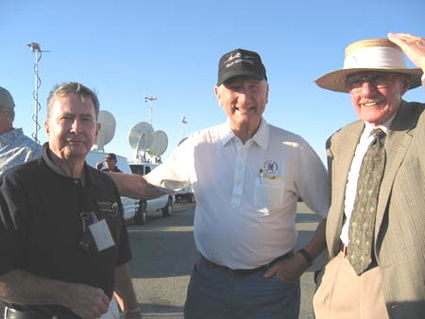 Bob was recognized by the Society of Experimental Test Pilots in 1964 with the Ivan C. Kincheloe Award for his work on Lockheed's super-secret Blackbird program. (The Mercury 7 astronauts received the Kincheloe Award the year before). He has been acknowledged by many other well-known aviation organizations: The National Aviation Hall of Fame, The Tennessee Aviation Hall of Fame, The California Aviation Hall of Fame, The Air Force Flight Test Historical Foundation awarded the Blackbird Laurels Medallions, the 2001 Godfrey L. Cabot Award in New England and he was distinguished on the Aerospace Walk of Honor by the City of Lancaster. Recently, he received the first-ever March Field Air Museum Champions of Flight Award, presented by legendary pilot/adventurer, Dick Rutan.

Robert J. "Bob" Gilliland is a true Southern Gentleman and outstanding aviation legend. My husband, Al and I, feel honored to call him our friend.