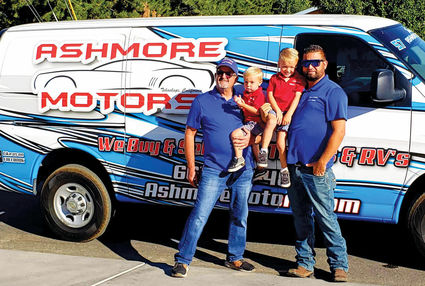 Marlon and Brandon Ashmore with their two future sales associates.

On July 7, 2014 Ashmore Motors opened their South Street sales lot and became Tehachapi's only auto sales location. Five years ago Marlon Ashmore and his son Brandon opened with a few cars on the lot. Today the lot is filled with cars of various makes and models, RVs and even motorcycles. Marlon said that the bulk of his clientele is local but many come from Bakersfield and the Antelope Valley, as well. He has had customers come from as far away as Lake Tahoe and even once sold a Corvette to a customer from Arizona. He said he was saddened when Kieffe and Sons in Mojave closed as they used to refer customers to Ashmore Motors.

Ashmore said that over the last five years a couple of other (auto) operations came and went in Tehachapi while Ashmore Motors has persisted. Marlon said he is not sure why they were unsuccessful but he strives to keep his customers happy knowing that cars are not always perfect.

"First and foremost we are in the people business," said Ashmore. "We just happen to sell cars and RVs."

Over the last five years he and Brandon have worked hard to build relationships and knowledge, and their efforts have certainly paid off.

Every Wednesday, Marlon and Brandon go to the car auction to find the best deals for the Ashmore lot. The business may possibly be closed that day. If they have to be away they have enlisted the assistance of Bob Mayberry, who came to them with experience from Galpin Ford in Los Angeles and RV experience from Camping World.

Marlon Ashmore thinks he is a lucky man.

"I get to work with my son every day, bring my dog to work and even work with my grandson once in a while," he said.

He suspects they may be grooming a third generation to take over the business as Brandon's four-year-old son sometimes accompanies them to auction.