Don Bailley and guardian, Al Cabrera, in front of the Washington Monument.

Each year, veterans are offered the opportunity to take a free trip to Washington D.C. to see the monuments. More importantly, this is to honor them for their service to the nation. World War II veterans and Korean War veterans have made the trip, and now they are concentrating primarily on our Vietnam veterans. Two veterans from Bear Valley Springs were awarded the honor this year. On June 17 they were on their way.

One of the honorees was Don Bailey. Don enlisted in March 1966 and served until 1969. In Vietnam he was an air traffic controller and had the highest level of security. Later he worked in aircraft maintenance. Upon discharge from the army he worked 30 years as patrol, vice, undercover and was promoted to detective. Prior to retirement, he worked his favorite detail as detective of the CECAT (concerned citizens and education auto theft) unit. It entailed working undercover, recovering stolen autos, and finding chop shops. Stolen cars are disassembled and sold for parts.

Don and his wife, Marilyn, moved to Bear Valley from Leona Valley in 2003, but had property in 1977 so their daughter could learn to barrel race. She maybe was influenced by Don who loved to race stock cars. He was quite the risk-taker and, on one occasion, flipped his car in a 17 sequence roll-over.

On the trip to Washington they landed at Reagan airport, where a larger than life-size statue of Reagan greeted them. Don said that almost made his trip right there, as President Reagan was his hero. They saw the Capitol Building, the Library of Congress and the Vietnam Memorial, of course. His Guardian, Al Cabrera of Bakersfield, found the name of a school friend on the plate of the memorial.

The Honor Flight veterans were given good seats for the Changing of the Guard. Don shared a fun fact with me: The guards look straight forward acknowledging no one, but they have a tapper on their shoe. To acknowledge the Honor Flight Vets, the guards will slowly run the tapper of the shoe on the pavement.

The other Bear Valley Springs recipient was Al Dameron, a well-known man about town. Al and his wife, Sandy, have lived here since 2004. Since then, Al has been very active in CERT and the VIPS, as well as our veterans group. In fact, he served as the captain of the VIPS for a number of years.

Al was born in Abilene, Texas but moved to California as a very young lad, and, aside from his service time, has lived most of his life in the state. He told me he enrolled in the USAF in 1959, during the Cold War. Some of his earlier years in the military were spent on a lookout tower out in the Atlantic, about 100 miles off Cape Cod. It was basically an early warning system to warn our land forces of incoming Russian missiles, ships or submarines. The towers were built on undersea mountains and had three globes in which the radar electronics were housed, plus a landing platform for helicopters. The next level down had the living quarters, and the lowest level held the engines and machinery to run the systems. He worked out there for about 18 months, but on rotating shifts. Every few days they could come ashore and another crew would go on duty. This was one of three towers out there. The intention was to have five, but it proved too dangerous for the crews on the towers. One blew over during a hurricane and they lost all of the crew.

Al stayed in the service until 1963, whereupon he left and worked for Thrifty Drugstores, rising to an executive level before retirement from the company. For a few years they lived in Washington state where he worked for one of the drug stores, Pay and Save, that Thrifty had purchased. Prior to moving here, he and Sandy lived in Glendora where he worked with the volunteer police.

Regarding the Honor Flight, their bus from Bakersfield to Burbank was delayed due to a technical difficulty, but the airline held the flight for them. Upon their arrival in D.C., they had time only for dinner at their hotel the first evening. Al's son, Scott, was his guardian, and they enjoyed their rare opportunity of three one-on-one days together. 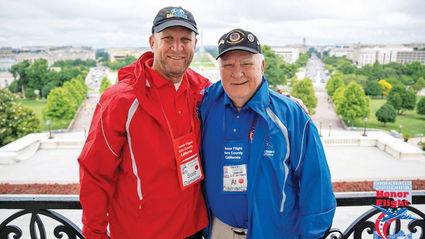 Al Dameron with his son, and guardian for the trip, Scott.

In Washington a motorcycle escort accompanied them the entire time, and they didn't have to wait for the typical traffic tie-ups. The trip included visits to the Marine, Navy, Airforce and Coast Guard memorials, plus Arlington National Cemetery, and of course, the sites mentioned earlier. All in all, it was a whirlwind visit.

During their visit to the Capitol Rotunda, Representative Kevin McCarthy met them and presented each and every Honor Flight veteran with a flag that has flown above the Capitol.

The trip lasted three days, but the organizers fit a lot in and were so efficient. Both Al and Don considered it one of the best times of their life, and it is a fitting reward for their service to the nation.