Independence Day: 160 years of celebrating in the Tehachapi Mountains

The Fourth of July, the annual holiday celebrating independence from England and the creation of the United States of America, is a festive occasion in the Tehachapi Mountains. It has been since it was first observed here in 1856.

We don't have many details about that first Fourth of July celebration, but it was mostly members of the John and Amanda Brite family and some of their friends. They were basically the only English-speaking residents of the Tehachapi Mountains in those days.

The Brites are credited with being the first permanent white settlers, arriving from Texas in 1854. They were joined by other pioneering families, including some who had travelled with them on the wagon train from Texas, including the Cuddeback, Wiggins and Smith families.

Fourth of July celebrations in those days typically consisted of big picnics during the day and a dance at night. This went on for decades, through the remainder of the late 1800s and into the 1900s. People worked virtually every day back then, and a day off to picnic and relax, followed by a dance that lasted well into the night, would be cause for celebration even without the national holiday.

Fireworks hadn't arrived in the Tehachapi Mountains yet, but people still were able to make loud noises, typically by firing their guns. People who still had old muzzleloader rifles seldom used them anymore, but they would often be dusted off and some ceremonial shooting would take place on the Fourth of July. This was both a nod to original American rebels, who fought the British with muzzleloaders, and also because of the satisfying sound and smoke produced by old black powder weapons.

Even in the 1950s and 1960s, Hooks Anderson of Cherry Lane was known for his Fourth of July tradition of loading up a couple of the muzzleloader pistols he had made himself, and then firing them both into the air, swashbuckling style, as he jumped into the swimming pool he had dug by hand and concreted using free cement from Monolith where he worked. He would carefully dry the pistols out afterwards to prevent rust from their annual Fourth of July bath.

Another explosive way to celebrate the Fourth of July was "firing an anvil." This dubious practice consisted of using the small square hole, typically found underneath iron anvils, and packing it with black powder and a fuse, and then lighting it to see how far the anvil would "jump" into the air. What could possibly go wrong?

I have an old anvil that came from the John Moore Brite sawmill that was up in Water Canyon, about where the wishing well and duck pond (neither in use anymore) are located at Tehachapi Mountain Park. Or I should say I have the top half of an anvil – the base is missing. I don't know for certain how the anvil got separated from its base, but anvil firing is definitely a possibility – there aren't too many ways to break an anvil.

After the turn of the 20th Century, as the little town of Tehachapi grew, the Fourth of July picnics and dances continued, with an added attraction: an annual baseball game, often pitting Tehachapi residents against Mojave residents.

This proved a huge attraction and on July 4 in the 1910s and 1920s, most of the motor vehicles in the Tehachapi Mountains could be found parked out where Tehachapi Airport is today to witness the big baseball game.

According to oldtimers who had been present, some of these games were accompanied by a fist fight or two afterwards between opposing players or fans.

Rodeos of various kinds also became part of Tehachapi Fourth of July celebrations, and continue to this day in the form of the Benz family's annual Bad Bulls bull riding event held at the Rodeo Grounds, followed by the firework show.

Informal pyrotechnic displays were put on by private citizens over the years, but in the 1950s through the 1980s, the Tehachapi firework display was organized and put on by local firefighters, who would also go door-to-door collecting donations toward the cost of the fireworks. The City of Tehachapi has put on the annual display for the past 20 years or so. It starts at 9 p.m. sharp and lasts for 20 exciting, loud, colorful minutes. 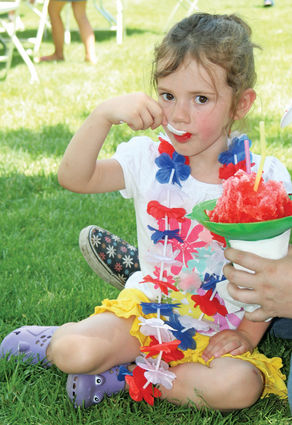 Enjoying a snow cone during Fourth of July celebrations sponsored by the TVRPD.

Other Fourth of July events have been added over the years, including sack races, egg toss, concerts and other events at City Park (now called Philip Marx Central Park) sponsored by the Tehachapi Valley Recreation & Park District.

More than 160 years after Independence Day was first celebrated in the Tehachapi Mountains by the Brite family and their friends, local residents still gather to rejoice and revel in being Americans. Let freedom ring. . . 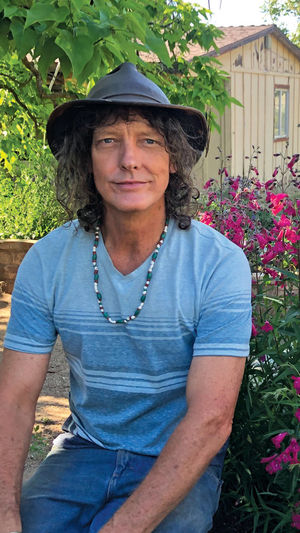