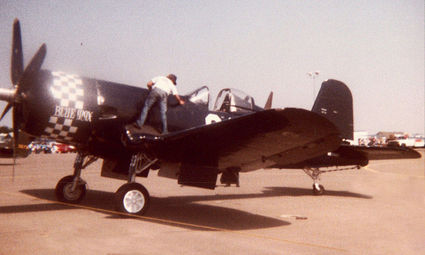 At the end of May, my youngest son, Douglas Burdick, apparently died from a heart attack at the age of 51. I couldn't believe that the clocks kept moving and time kept moving on. My life totally stopped the moment I found him. My life will never be the same. The sudden loss of one of your children is devastating.

What a great and multi-faceted life Douglas led. When he was very young, his father and I were deeply involved in aviation and had the opportunity to work with Bill Barnes, Pancho's son. Through Bill, our family was called to work as the pit crew for an unlimited racer.

Doug was only 2-years-old when he attended the Mojave Air Races in 1970. He got to sit in many of the famous race planes of that era, including the F4U-7 Corsair, Blue Max. His brother, Mark, was five years older and helped his father work on the aircraft at a very early age.

This Corsair was owned by Bob Guilford and Steve Rosenberg and was one of the planes used during the flying sequences for the TV series "Baa Baa Black Sheep."

This particular Corsair, F4U-7 Blue Max, was the 41st of 94 F4U-7s that Chance Vought produced at their plant in Grand Prairie, Tex. for the French Navy (Aeronavale). Delivered through the Military Assistance Program (MAP), '693 arrived at NAS Karouba, Tunisia in the spring of 1953.

Bob Guilford purchased the dash-7 in April 1970. He named her Blue Max and raced the fighter for the next 17 years.

In 1976, Blue Max's bold markings were covered in overall dark blue in preparation for her role in "Black Sheep" with Steve Rosenberg at the controls. On August 19 of that year, having flown just three sorties for the cameras, Blue Max suffered a catastrophic engine failure which ended her "Black Sheep" career.

The Chance-Vought F4U Corsair had a unique and easily recognizable shape, with an inverted gull wing, sometimes called, "the bent-winged bird." It had the largest propeller of any U.S. fighter, and was also expected to face rough landings aboard a pitching carrier deck, so the inverted gull wing allowed the landing gear to be short and tough, but still allowed room for the 13-plus-foot propeller.

Corsairs were built by the Vought-Sikorsky Division of United Aircraft Corporation and also by Brewster and Goodyear. They were powered with the Pratt & Whitney R-2800 Double-Wasp radial engine, but Goodyear made a few Super Corsairs that were fitted with the R-4360 Wasp Major, 28-cylinder, four-row radial, nicknamed "the corncob."

Corsairs were flown in the Korean War and was the only WWII fighter that participated in the entire conflict. A Corsair even shot down a Soviet built MiG-15 jet fighter. 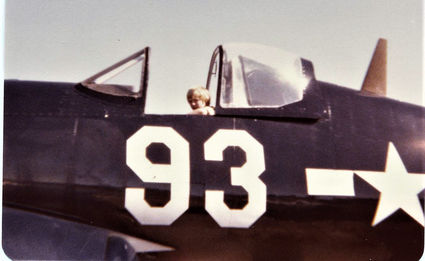 Douglas was a lifelong resident of Antelope Valley. He grew up in Lancaster and worked with composites at firms located at Mojave Airport and also some of the wind farms in Mojave and Palm Springs. Some of his special talents were with music and art, but mostly in giving of himself to others and particularly his attention to feral cats and abandoned dogs.

Doug was a tireless volunteer worker on Memorial Day, veterans Day and Plane Crazy Saturday. He also volunteered for events with the Mojave Chamber of Commerce and Mojave Transportation Museum and cooked for the U.S. Naval Test Pilot School barbecues held at the Hansen Hangar for many years. He will be profoundly missed by all who knew him, as he was always so hard-working, happy and outgoing.

So many wonderful memories, thank you for being you. Mom will love you always, Doug. You are forever in her heart.