Snake season: Gophersnakes and rattlesnakes return for the warmer months 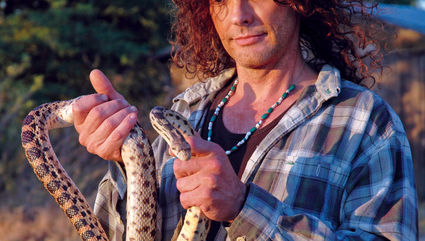 The warmer months have arrived in the Tehachapi Mountains, and with the rise in temperatures comes the return of the reptile kingdom. Snakes and lizards are here year-round, of course, but they hibernate when it's cold, typically disappearing around September and October and re-emerging on warm days in March and April.

California is one of the most snake-diverse states in the U.S., with a current total of 72 species and subspecies, exceeded only by Texas with 115 species and subspecies. Snakes like warm, sunny weather, and California has three deserts – the vast Mojave, the Great Basin along the eastern edge of the state, and a small portion of the Sonoran Desert to the southeast.

Kern County, the third-largest in the state, is one of the more reptile-rich of California's 58 counties. A total of 35 species and subspecies snakes have been recorded in Kern County, and the Tehachapi Mountains are home to "intergrades" of a number of species – our mountains form a natural barrier between the Mojave Desert and San Joaquin Valley, and different snake subspecies mingle in the Tehachapis and produce offspring.

Okay, so that's the overview of snakes in our area. The ones that concern people most, of course, are rattlesnakes, which are venomous pit vipers. They are not poisonous – you can eat them, minus the head, of course – but they possess venom that they inject with hollow fangs.

Rattlesnake venom is intended to immobilize and kill their prey. Rattlesnakes bite their prey, injecting venom as they bite, then immediately release. They then follow the scent of their prey and swallow it whole when they find it stricken.

That's an important thing to remember about snakes – they can't take bites out of large prey. They have to either swallow it whole, or it is useless to them. Snakes only strike oversized animals, like people and horses, defensively. Rattlesnakes and harmless snakes alike in our area are well aware that we are way too big to be prey items, so they only strike if they feel threatened.

Gophersnakes are common, often large and muscular snakes that can be found in most areas parts of the Tehachapi Mountains. They like mixed habitat, with open areas, and are the species most often seen as road kill carnage.

Gophersnakes usually have a tan or straw base color with a row of dark brown or chocolate saddle patches ranging down their backs. These markings help Gophersnakes blend into their surroundings, but it also leads them to be confused with more dangerous relatives: rattlesnakes. Gophersnakes sometimes increase the illusion by hissing loudly to create a sound suggestive of a rattlesnake.

This similarity can be a double-edged sword for Gophersnakes: some creatures and people may give them a wide berth, thinking them dangerous, but it also leads people to kill these harmless, rodent-eating snakes because they are mistaken for rattlesnakes.

Almost all rattlesnakes found in the Tehachapi Mountains belong to a single species: the Northern Pacific Rattlesnake (Crotalus oreganus oreganus). There is a great diversity in appearance of these snakes, from very light to very dark, and they may have reddish, greenish, or grayish overtones. Nonetheless, they are all Northern Pacifics. Oldtimers often refer to the darker rattlesnakes found in more forested, higher elevations as Timber Rattlesnakes, but actual Timber Rattlers are an eastern species not found on this side of the Rockies.

In the foothill canyons to the east you can sometimes encounter Northern Mohave Rattlesnakes (Crotalus scutulatus scutulatus), occasionally referred to as Mojave Greens because of the greenish hue some of these snakes exhibit.

These two species can usually be distinguished by the markings on their tail, near the rattle: in Northern Pacifics, the dark bands tend to be much wider and the light bands tend to be considerably narrower; in Northern Mohave rattlers, this pattern is reversed, with the white or light bands usually wider and the dark bands narrower. Admittedly, most people don't like to get close enough to examine either end of a rattlesnake.

But there's good news: rattlesnakes typically avoid people. They don't always avoid places where people live and work, but they do try not to cross paths with humans. When this does happen, rattlesnakes tend to vibrate the rattles on the end of their tail so rapidly that it sounds more like a buzzing than a rattling sound. This is a warning that is good to heed.

Even with rattlesnakes' retreating behavior and the buzzing warning, people and pets do occasionally get struck by rattlesnakes in the Tehachapi Mountains, requiring immediate medical attention at a hospital or veterinary clinic to administer antivenin. Happily, you can usually avoid rattlesnakes by being cautious around boulders and wood piles where they like to reside. Also, be aware of their thermal requirements: snakes have a fairly narrow window of comfort, typically between 65 and 85 degrees Fahrenheit. So in cooler weather be more cautious of sunnier areas, and on hot days, look for snakes in the shade. 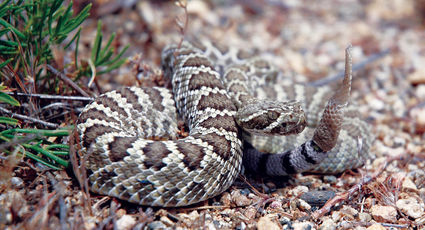 In the foothill canyons to the east you can sometimes find Northern Mohave Rattlesnakes like this young one, which has the final tip of its shedding skin covering its rattle like a cap.

Usually what you'll find are harmless Gophersnakes, searching for mice or other rodents. Please don't hurt them, they are no threat to you or anyone else. 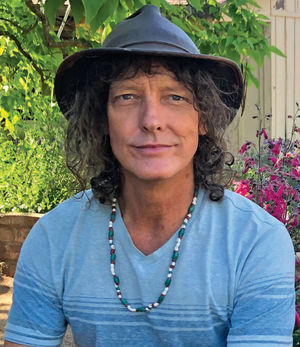