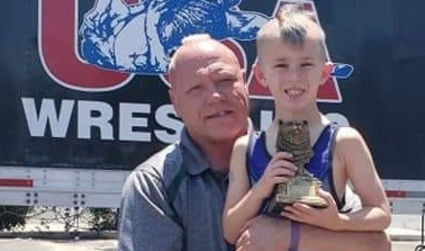 Tehachapi Valley Wrestling Club finished the year with two second place finishers at the California USA Wrestling Kids Freestyle Championships at Selland Arena in Fresno. First year wrestler Jake Brown has made his mark in the Bantam Division 43 pounds at the State level this year, with a second place bear! "Jake had some great matches throughout his bracket," said Coach Curtis Nelson.

Reese Hart continues to blossom in the Girls Novice Division. Reese competed in a weight class and lost only by two points in the finals of the 110 pound class. "Reese just needs to build confidence in her moves and she will be a State Champion," said Nelson.

Kayden Gonzales was also supposed to compete, but had to forfeit due to illness Saturday morning. "It was one of those things that happens, Kayden worked very hard all year and I think he would have placed," said Nelson.

TVWC will be working on fundraising in the off season and hopes the community will support them. Tehachapi's 4th of July celebration will be their first event at the Philip Marx Central Park, stop by and see their display boards! Anyone interested in wrestling can contact Curtis Nelson (661) 557-1366.