Comic Con at the Tehachapi Library 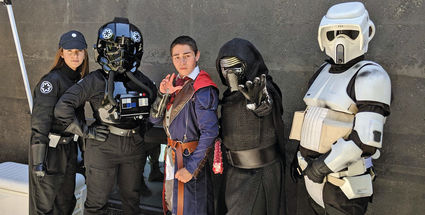 Members of the 501st Legion with attendee Nico Torres as Arno Dorian of Assassin's Creed.

Tehachapi Branch Library hosted their first annual Comic Con on Saturday, June 15. Over 200 comic fans showed up, many in costume, to enjoy the festivities. Local artists from Tehachapi and surrounding communities displayed their art, including: Jerry Benavente who has drawn for "Batman: The Animated Series;" Donald Towns who worked on Disney's "Aladdin," "Beauty and the Beast," "The Little Mermaid" and "The King and I"; Istvan Majoros who worked on "The Simpsons," "Futurama," "Fern Gully" and "Tiny Toons;" also Ernie Hernandez, Red Grafstrom, Saida Woolf and Cora Sweeney.

A costume contest was held: 1st place for the kids was Jaina (as Rapunzel of Tangled), 1st place for teens was Jacqueline Torres (as Valkyrie of Thor), 1st place for Adults was Nico Torres (as Arno Dorian of Assassin's Creed), and a special win for Most Creative went to Jonathan Magill for Every Background Extra. Prizes were donated by Crunchyroll and DC Comics.

Professional cosplayers, including the 501st Legion and Hire A Hero, were in attendance, bringing a real R2D2 droid to roam the Library, providing awesome photo ops for fans.

The Tehachapi Teen Advisory Board (T-TAB ), comprised of local teens who donate their time and talents to planning and running fun events at the library (Jacqueline Torres, Kara Rasmussen, Versailles Zendejas, Samuel Torres, Liam Haas and Erik Rasmussen), helped with much of the planning and running of this event. Months beforehand, they launched a letter-writing campaign to celebrities, with invitations.

The T-TAB received a personalized video response from Sir Ian McKellen all the way from London. He sent his regrets that he could not come, but also sent his love, and support for literacy efforts. His video can be seen on the Tehachapi branch Library Facebook page.

T-TAB also received an autographed picture from Robert Downey, Jr., in response to their invitation. 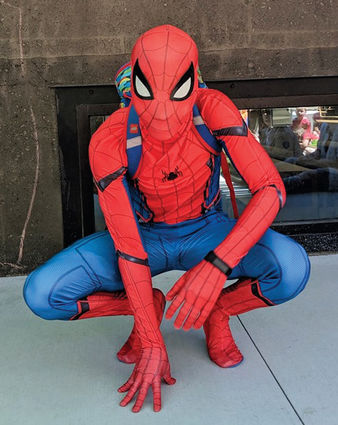 Kara Rasmussen, of T-TAB, designed the logo for the Tehachapi Library Comic Con, which is now on a T-shirt.

The Tehachapi Library Comic Con, was dedicated to the memory of Kyler Ferguson, a local teen, who tragically passed away earlier this year. Kyler was a lover of comics and the ultimate Batman fan. His family helped put together a display in his memory.

Be sure to check out the Tehachapi Branch Library Facebook page for many pictures. The Tehachapi Library Comic Con will be an annual event.