Can you believe that it was 15 years ago on June 21, 2004, that SpaceShipOne and Mike Melvill rocketed into aerospace history? Mike Melvill piloted SpaceShipOne on its first flight past the edge of space, (100 kilometers or 62 miles) Flight 15P, becoming the first commercial astronaut and the 434th person to go into space.

SpaceShipOne, a Paul G. Allen project with Scaled Composites, launched the first private manned vehicle beyond the Earth's atmosphere. The successful launch demonstrated that the final frontier was opened up to private enterprise.

Burt Rutan, Scaled Composites founder and CEO at the time said, "Our success proves without question that manned space flight does not require mammoth government expenditures." Rutan declared. "It can be done by a small company operating with limited resources and a few dozen dedicated employees."

Not a typical smooth flight – "Very rough ride initially, a lot of pitching," Mike told Doug Shane, Mission Control director. As the rocket motor was burning, wind shear moved SpaceShipOne 90-degrees to the left and Mike compensated the move by trimming the spacecraft 90-degrees to the right and banking 180-degrees. He was approaching Mach 1 and was 30 miles off course, as the spacecraft completed 29 rolls streaking upwards into space and the black sky. He had lost stick and rudder control, as he went faster than the speed of sound, and shock waves diminished the use of the control surfaces.

The enormous crowd on the ground didn't realize he was rolling as he went through the sound barrier and a large boom was heard. Everyone cheered and I remember Mike's wife, yelling, "Go Michael, go!" General Doug Pearson, commanding officer of Edwards AFB made a quick phone call to approve SpaceShipOne breaking into Edwards air space.

An interesting side story of this flight was Mike wanted to illustrate what weightlessness looked like to everyone. The night before the flight, he stopped in at the local ampm mini-market and bought a small bag of M&Ms. He poured them into a pocket of his flightsuit, but didn't tell anyone, as he knew he would be told that he couldn't release them inside the space ship.

Of course, during all of the excitement of the takeoff, release from the mothership, WhiteKnightOne, the ignition of the rocket motor and the trying to get the spacecraft under control, he had forgotten about the M&Ms, until he reached apogee. It was quiet, the sky was black, the Earth was beautiful to look down on, and as he was taking photos, he remembered that he had placed the M&Ms in his shoulder pocket.

He unzipped the pocket and got a handful of M&Ms and let them go right in front of his face and they just stayed there. He was amazed at them just floating there. In a video he said, "It was just a weird feeling, because if you do that here they just fall on the ground."

He pushed them around to see what would happen and they floated all around. Mike said, "I reached into my pocket and threw out another handful and then went on about my business." You can watch the Youtube video at: http://www.youtube.com/watch?v=AAAHcjfe-r0. 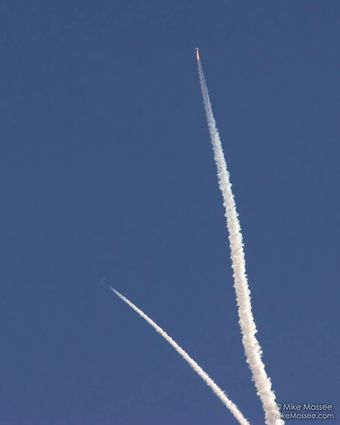 "The re-entry is very exciting," said Mike. He described Burt Rutan's ingenious "feather" invention by saying, "We bend the feather on the tail up 70-degrees to the fuselage. So, rather than coming into the atmosphere nose down, like the space shuttle, we bend the feather up and re-enter with the fuselage and the wing flat to the atmosphere, so we have an enormous amount of drag, which slows it down very quickly at very high altitude. We don't get the high heat buildup that we would if we came in nose first and that was the key to the success of the whole program. It's a carefree re-entry method that Burt invented himself and he was sure correct about that. It worked flawlessly every time."

It was wonderful to see Sally run up to Mike as he exited SpaceShipOne. They have a beautiful and everlasting love for one another that is extraordinary. He was wearing the lucky horseshoe that she had pinned onto his flightsuit before the takeoff that morning. He had the horseshoe pin designed for Sally in 1961 with their names inscribed on it.