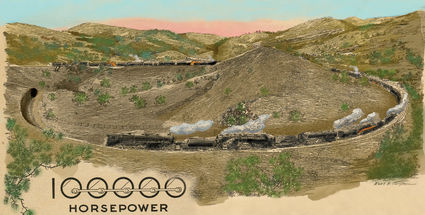 This drawing was made in black and white by noted artist Enos B. Comstock, who was a frequent illustrator for Boys Life and other magazines, and he also provided the illustrations for a number of books. Comstock apparently made this drawing for an unknown publication that included Nejedly's account of the 24 steam engine train.

The following is Frank Nejedly's marvelous account of what may have been the greatest single assembly of steam locomotives in railroading history, and it occurred quite unintentionally in Tehachapi in November of 1942. Nejedly was a Southern Pacific telegrapher and amateur photographer who explored throughout this area – his 1911 Studebaker was one of the earliest cars in the Tehachapi Mountains. He was a handsome, robust man of keen intellect and memory, with an encyclopedic knowledge of trains. Let Frank tell you about that magical day.

Have any of you ever seen 24 live steam locomotives coupled, every engineer with his hand on the throttle and every fireman at his post, making a 50-mile run? Well, on its Tehachapi-Bakersfield line in the Tehachapi Range, the Southern Pacific ran a train that probably established a world record. It wasn't a Hollywood stunt, either, or even deliberate. The Tehachapi Mountains are a small chain connecting the Coast Range with the Sierra Nevadas, the barrier separating the rich San Joaquin Valley from Southern California. It's often called the dividing line between Northern and Southern California. The distance across the old Tehachapi Mountain, dominating the summit of the range, isn't great, but every foot of it is tough going.

Leaving Bakersfield for Los Angeles, the SP's line for 17-miles is double-track to Bena. There the climb over the Tehachapis begins – curves, horseshoes, tunnels and bridges. The famous Loop is here, too. The prevailing grade is 2.2 percent. From Bena to Tehachapi, including those two points, there are six 24-hour telegraph offices, the others being at Caliente, Bealville, Woodford and Marcel. It is 34-miles from Bena to the summit of Tehachapi Pass. From there to Mojave, eastern end of the Pass, it is double-tracked.

This track between Bakersfield and Mojave is used jointly by the SP and Santa Fe. During the World War II days it was one of the busiest stretches of mountain railroad in the country. From any point on the mountain, day or night, you'd see a train – lots of times, a dozen of them. If the line was straight, this would be impossible, but it winds and twists and turns back on itself like a serpent. It's only a mile or so between Bealville and Caliente as the raven flies – but the rail distance is 5 and 1/3 miles; the 8 and 1/2 air miles between Marcel and Caliente require 19-miles of looped and twisting rail. And while it's only 900 linear feet between the east and west switches at Walong siding, a train 1 and 1/4 miles long can squeeze in there.

From a vantage point above the Tehachapi Loop at Walong you can get a clear view of about 6-miles of track on as many levels. Often times you can see six trains at once. Sometimes two of them are taking water at Woodford, another is on a siding to meet an opposing train, and two others are going up and down the mountain. Between downhill trains you can see strings of helper engines running light down to Bakersfield after the climb to the summit. Frequently as many as 12 or 15 are coupled, running as a train. Eastbound trains often meet one or more westbound trains at every siding and the sidings are close together.

Trains appear to be doing a square dance as they weave from one side of the mountain pass to the other. They meet and pass; they glide around rocky precipices, curves and horseshoes that would make your hair stand on end; then they circle the Loop like swinging partners, suddenly disappearing in tunnels, then popping out for a few minutes before heading into another one. In winter at the Loop tunnel, head brakemen on trains – sometimes 1 and 1/4 miles long – often pepper their caboose with snowballs as it passes 78 feet below them. There have been times when these shacks have beaned their skippers – sure bid for a laugh. Every freight train leaving Bakersfield has three or four helpers. When they cut out at Summit switch before returning light to Bakersfield, these helper engines run the two miles west to Tehachapi where they remain on a siding while the crews eat. But often, after they've stowed away a big meal, they're unable to leave due to rail traffic. While they wait for their chance, still more helpers arrive and couple onto the ones already there.

That is what happened on a Sunday early in November 1942 when one helper after another reached Tehachapi and lined up. It was early evening before there was a break in oncoming traffic. By that time two tracks in the Tehachapi yard were filled and the train was ready to leave – 24 live locomotives totaling 100,000 horsepower, each with her crew of engineer and fireman, 48 men in total. All were large mountain engines. There were SP Mallets and passenger power of the famous Daylight class, Santa Fe 900, 1600 and 3800 class, all 10 drivers. Boy, she was something to look at, this all-locomotive train! Nearly 1/2 a mile long.

Leaving Tehachapi, the downhill grade is slight for over a mile, where all engines were working steam until they approached the heavy grade – here speed is restricted to 20 miles per hour. If this great event had been planned, you can bet your life there would have been many photographers around to shoot it. But being all in a day's work, only a few witnesses were on hand. No matter how you look at it, it's a record.

I get excited at the thought of a single steam engine puffing through Tehachapi – the idea of seeing not two, or three, or five but a total of 24 steam locomotives, all of them actively running and crewed, chugging their way down the hill in a single train, is amazing to consider. And what an incredible show of strength. Yes, the 24-locomotive train would have been truly spectacular, the longest in the 140-year history of the Tehachapi line, and maybe the biggest in human history. If I had a Tehachapi time machine, that brisk day in November 1942 would definitely be one of the presets on the time dial. – Jon Hammond 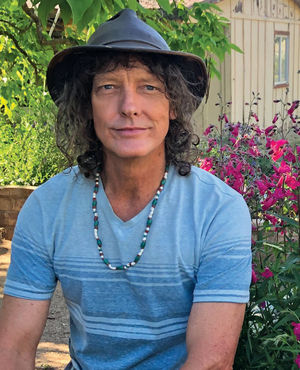