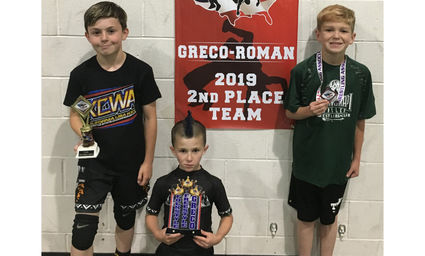 The Team was competing for the top three honors in each of the styles, as well as individuals, that were shooting to win their age group/weight class. The new "Triple Crown" award was also up for grabs.

First year wrestler, Jake Brown hit the mat with his wrestling skills and won the Bantam 45-pound weight class in both Freestyle and Greco-Roman. Jake had also won the Folkstyle Champion trophy in February, which earned him the "Triple Crown" award.

"Jake is a unique first year wrestler, he has great balance and is very strong," said Coach Curtis Nelson. "This is the first year KCWA has had Greco and offered a 'Triple Crown' award and Jake was the only Kern County wrestler to accomplish winning all three styles of wrestling."