So, what do a small, green, plush Hedgehog toy, Henry's Café, mountain rescuers and Slice of Life Enrichment School have in common? Read on and you will find out.

On Tuesday, May 28 Susan Minor, the owner of Slice of Life Enrichment School, where art, music and languages are taught, was waiting to be seated for breakfast at Henry's Cafe. Suddenly, her ears pricked up! Did she hear someone speaking French? She looked around quickly to find out where the French voices were coming from. She saw four men sitting at a table nearby enjoying their breakfast. She went over and introduced herself to them, and it turned out they were visiting from France. She explained that she teaches French at her school in Tehachapi, and they invited her to join them for breakfast. Susan sat down, happy for the opportunity to talk with native French speakers.

The tale of how Frédéric, Vincent, Alexandre and Franc came to be in Tehachapi unfolded. All four of them are "Gendarmes" which is the French countryside law enforcement department – roughly equivalent to our Sheriff's Department. ("Policiers," are the French law enforcement in cities, like our Police Departments.) In particular, they work for the Gendarme Mountain Rescue Team. Of the 100,000 Gendarmes in France, the Mountain Rescue Team consists of only 200 members. They rescue anyone who is stranded, injured or lost in the French mountains. Frédéric is the lead instructor for the team. He had trained the three others two years previously. The four of them had remained friends, even though they all work in different mountain ranges of France.

They came over to the United States with the intention of climbing in Yosemite. They also wanted to discuss mountain search and rescue techniques with local American mountain search and rescue team members. Unfortunately, due to the inclement weather, it was not possible for them to do any climbing in Yosemite. They were particularly disappointed that they could not climb El Capitan as they had intended. Rather than just sitting and twiddling their thumbs, they decided they would do some climbing elsewhere. There are, after all, plenty of other mountains in nearby states. They set off with the intention of going to Utah, Arizona and Nevada to do what climbing they could.

They departed from Yosemite in the early hours of the morning and, by the time they were close to Tehachapi, they were feeling hungry enough to stop for breakfast. They pulled off the freeway and went to Henry's Café. When they had finished eating a hearty breakfast, they continued on their way. After driving for about an hour, they suddenly realized that they had left a small, but important, member of their group behind. This was a small, green, plush hedgehog named Lulu. She had belonged to Vincent ever since he was a small boy, and he takes her with him whenever he goes traveling. They had driven too far to turn around and go back, so they emailed Henry's Café at the first opportunity, and asked them to look for the little green hedgehog. Henry's Cafe staff found Lulu and promised to keep her safe until they made the return journey to Yosemite, when they would again be passing by Tehachapi.

The group had a wonderful time climbing in spectacularly beautiful places, such as Moab. They also spent one night in Las Vegas which was different from anything any of them had experienced before! Finally they headed back to Yosemite. Upon returning to Henry's Cafe, they discovered that Lulu had become something of a celebrity with the customers. Her story had spread amongst the Café's clients. Someone had decided that Lulu was probably lonely and needed a friend. So a plush St. Bernard, complete with barrel, was purchased as a fitting companion for Lulu and the mountain rescuers! The guys were happy to be reunited with the little green hedgehog, and add the St. Bernard to their happy band.

Susan Minor met the travelers while having breakfast at Henry's Café after picking up Lulu. After talking to them for a little while, Susan told them that she had to leave because her Beginner's French class was starting shortly. She explained about her school, and the French lessons which she teaches. Hesitantly, she asked if the mountaineers were busy and, if not, would they be interested in coming along with her to see the Slice of Life School and attend the French lessons? She was sure that all the pupils would be thrilled to meet them. Obligingly, they said they were not pressed for time, and that they would love to come along and visit the school.

Not only did they visit the school, but Frédéric, the instructor of the group, agreed to teach, so Susan turned over the classes to him. It was a wonderful experience to have French people in the classroom. It was such a treat for all the pupils. Everyone was very enthusiastic and happily chatted to the mountaineers. Frédéric did a great job of teaching the lessons. He invited the pupils to ask questions of him and his team – in French of course!

The mountaineers told stories about their lives and their families in France, and answered all kinds of questions. There is a map of France on the wall of the classroom, and they took turns pointing out where each of them lives and works. All four of them had been to America before, and it was Frédéric's fourth visit to the U.S.

When questioned about why he liked visiting the U.S. so much, Frédéric explained that he had been inspired to come here to visit because, as a child, he had been an ardent fan of John Wayne. He avidly watched every movie of the Duke's that he could. He told us he even used to copy John Wayne's way of talking and walking when he was little. He gave us a demonstration, strutting round the classroom like a saddle sore cowboy, drawling in French with his best John Wayne accent. The whole class was in fits of laughter at his performance. 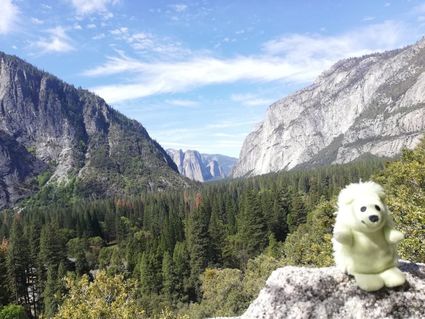 Lulu, the little green hedgehog in the mountains.

Now Frédéric loves visiting the U.S. and does so whenever he can. In particular, the mountaineers love how the scenery in America is so very different from France with vast plains and spectacular, rugged mountain ranges. They commented that they met friendly, warm people everywhere they went in the U.S. They said everyone was kind and very helpful. They said Americans are truly "sympathique." Tehachapi is renowned for its hospitality to PCT hikers who come from all around the globe, so it is heartening to hear that strangers and travelers receive the same kind of welcome from other areas around California, and in neighboring states.

It was an inspiring and truly international day for all at Slice of Life Enrichment School. It was such a treat to listen to native French speakers, and have assistance with tricky pronunciation and grammar. The pupils are all hoping that, whenever the mountaineers come back to visit, that they will drop by and teach another couple of lessons. Everyone is looking forward to their next visit!